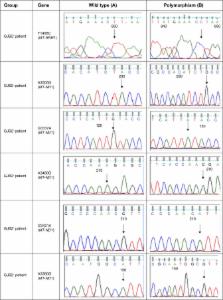 Mitochondrial DNA mutations play an important role in causing sensorineural hearing loss. The purpose of this study was to determine the association of the mitochondrial genes RNR1, MT-TL1, and ND1 as well as the nuclear genes GJB2 and GJB6 with audiological examinations in nonfamilial Iranians with cochlear implants, using polymerase chain reaction, DNA sequencing, and RNA secondary structure analysis. We found that there were no novel mutations in the mitochondrial gene 12S rRNA ( MT-RNR1) in patients with and without GJB2 mutation (GJB2 + and GJB2 −, respectively), but a total of six polymorphisms were found. No mutations were observed in tRNA Leu ( UUR ) ( MT-TL1). Furthermore, eight polymorphisms were found in the mitochondrial ND1 gene. Additionally, no mutations were observed in the nuclear GJB6 gene in patients in the GJB2 − and GJB2 + groups. The speech intelligibility rating and category of auditory perception tests were statistically assessed in patients in the GJB2 − and GJB2 + groups. The results indicated that there was a significant difference ( P<0.05) between the categories of auditory perception score in the GJB2 − group compared to that in the GJB2 + group. Successful cochlear implantation was observed among individuals with GJB2 mutations (GJB2 +) and mitochondrial polymorphisms compared to those without GJB2 mutations (GJB2 −). In conclusion, the outcome of this study suggests that variation in the mitochondrial and nuclear genes may influence the penetrance of deafness. Therefore, further genetic and functional studies are required to help patients in making the best choice for cochlear implants.

P. Baldi,  Christine Brandon,  Dennis D Wallace (2006)
The metabolism of solid tumors is associated with high lactate production while growing in oxygen (aerobic glycolysis) suggesting that tumors may have defects in mitochondrial function. The mitochondria produce cellular energy by oxidative phosphorylation (OXPHOS), generate reactive oxygen species (ROS) as a by-product, and regulate apoptosis via the mitochondrial permeability transition pore (mtPTP). The mitochondria are assembled from both nuclear DNA (nDNA) and mitochondrial DNA (mtDNA) genes. The mtDNA codes for 37 genes essential of OXPHOS, is present in thousands of copies per cell, and has a very high mutations rate. In humans, severe mtDNA mutations result in multisystem disease, while some functional population-specific polymorphisms appear to have permitted humans to adapt to new environments. Mutations in the nDNA-encoded mitochondrial genes for fumarate hydratase and succinate dehydrogenase have been linked to uterine leiomyomas and paragangliomas, and cancer cells have been shown to induce hexokinase II which harnesses OXPHOS adenosine triphosphate (ATP) production to drive glycolysis. Germline mtDNA mutations at nucleotides 10398 and 16189 have been associated with breast cancer and endometrial cancer. Tumor mtDNA somatic mutations range from severe insertion-deletion and chain termination mutations to mild missense mutations. Surprisingly, of the 190 tumor-specific somatic mtDNA mutations reported, 72% are also mtDNA sequence variants found in the general population. These include 52% of the tumor somatic mRNA missense mutations, 83% of the tRNA mutations, 38% of the rRNA mutations, and 85% of the control region mutations. Some associations might reflect mtDNA sequencing errors, but analysis of several of the tumor-specific somatic missense mutations with population counterparts appear legitimate. Therefore, mtDNA mutations in tumors may fall into two main classes: (1) severe mutations that inhibit OXPHOS, increase ROS production and promote tumor cell proliferation and (2) milder mutations that may permit tumors to adapt to new environments. The former may be lost during subsequent tumor oxygenation while the latter may become fixed. Hence, mitochondrial dysfunction does appear to be a factor in cancer etiology, an insight that may suggest new approaches for diagnosis and treatment.

Roy Stevens,  F. Mueller,  David Parry … (1997)
Severe deafness or hearing impairment is the most prevalent inherited sensory disorder, affecting about 1 in 1,000 children. Most deafness results from peripheral auditory defects that occur as a consequence of either conductive (outer or middle ear) or sensorineuronal (cochlea) abnormalities. Although a number of mutant genes have been identified that are responsible for syndromic (multiple phenotypic disease) deafness such as Waardenburg syndrome and Usher 1B syndrome, little is known about the genetic basis of non-syndromic (single phenotypic disease) deafness. Here we study a pedigree containing cases of autosomal dominant deafness and have identified a mutation in the gene encoding the gap-junction protein connexin 26 (Cx26) that segregates with the profound deafness in the family. Cx26 mutations resulting in premature stop codons were also found in three autosomal recessive non-syndromic sensorineuronal deafness pedigrees, genetically linked to chromosome 13q11-12 (DFNB1), where the Cx26 gene is localized. Immunohistochemical staining of human cochlear cells for Cx26 demonstrated high levels of expression. To our knowledge, this is the first non-syndromic sensorineural autosomal deafness susceptibility gene to be identified, which implicates Cx26 as an important component of the human cochlea.