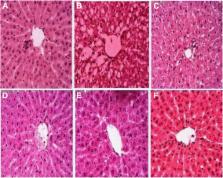 Fagonia olivieri (DC) being used for the treatment of diabetes, cancer, fever and claimed to be effective in many other stress related disorders. In this study we have evaluated the F. olivieri whole methanol extract and its derived fractions for various in vitro and in vivo antioxidant studies.

The crude methanol extract of the whole plant of F. olivieri (FOM) and its derived fractions; n-hexane (FOH), chloroform (FOC), ethyl acetate (FOE), n-butanol (FOB) and aqueous (FOA) were evaluated for the total phenolic and flavonoid content and in vitro antioxidant abilities. The antioxidant effect of FOM was determined by acetaminophen-induced hepatotoxicity in Sprague–Dawley ( Rattus novergicus) male rats. The methanol/fractions were also analysed by HPLC analysis for the presence of polyphenolics.

Our results showed that F. olivieri is a potential source of natural antioxidants, which justifies its use in folklore medicine.

Prevention of cytotoxicity and inhibition of intercellular communication by antioxidant catechins isolated from Chinese green tea.

J Hinson,  R Mayeux,  Dominique James (2003)
The analgesic acetaminophen causes a potentially fatal, hepatic centrilobular necrosis when taken in overdose. The initial phases of toxicity were described in Dr. Gillette's laboratory in the 1970s. These findings indicated that acetaminophen was metabolically activated by cytochrome P450 enzymes to a reactive metabolite that depleted glutathione (GSH) and covalently bound to protein. It was shown that repletion of GSH prevented the toxicity. This finding led to the development of the currently used antidote N-acetylcysteine. The reactive metabolite was subsequently identified to be N-acetyl-p-benzoquinone imine (NAPQI). Although covalent binding has been shown to be an excellent correlate of toxicity, a number of other events have been shown to occur and are likely important in the initiation and repair of toxicity. Recent data have shown that nitrated tyrosine residues as well as acetaminophen adducts occur in the necrotic cells following toxic doses of acetaminophen. Nitrotyrosine was postulated to be mediated by peroxynitrite, a reactive nitrogen species formed by the very rapid reaction of superoxide and nitric oxide (NO). Peroxynitrite is normally detoxified by GSH, which is depleted in acetaminophen toxicity. NO synthesis (serum nitrate plus nitrite) was dramatically increased following acetaminophen. In inducible nitric oxide synthase (iNOS) knockout mice, acetaminophen did not increase NO synthesis or tyrosine nitration; however, histological evidence indicated no difference in toxicity. Acetaminophen did not cause hepatic lipid peroxidation in wild-type mice but did cause lipid peroxidation in iNOS knockout mice. These data suggest that NO may play a role in controlling lipid peroxidation and that reactive nitrogen/oxygen species may be important in toxicity. The source of the superoxide has not been identified, but our recent finding that NADPH oxidase knockout mice were equally sensitive to acetaminophen and had equal nitration of tyrosine suggests that the superoxide is not from the activation of Kupffer cells. It was postulated that NAPQI-mediated mitochondrial injury may be the source of the superoxide. In addition, the significance of cytokines and chemokines in the development of toxicity and repair processes has been demonstrated by several recent studies. IL-1beta is increased early in acetaminophen toxicity and may be important in iNOS induction. Other cytokines, such as IL-10, macrophage inhibitory protein-2 (MIP-2), and monocyte chemoattractant protein-1 (MCP-1), appear to be involved in hepatocyte repair and the regulation of proinflammatory cytokines.