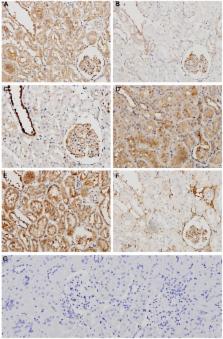 Huang Gan formula (HGF) is a new traditional Chinese herbal medicine created according to the basic theory of traditional Chinese medicine. The aim of this study is to evaluate the effects of HGF on chronic kidney disease and determine the mechanisms of action. The extract of HGF was prepared, and qualitative and quantitative determination of phytochemical was performed with quadrupole time-of-flight mass spectrometer and high-performance liquid chromatography. Sprague-Dawley rats (n=72) were submitted to 5/6 nephrectomy (Nx), and then respectively treated with uremic clearance granule, losartan, HGF low dose, HGF middle dose, and HGF high dose once per day for 12 weeks. The sham group of operated rats (n=22) was treated with normal saline or HGF middle dose as a background control group. Blood and urine biochemical parameters, renal tissue morphology, and mRNA and proteins of Wnt/β-catenin signaling pathways were investigated. The results showed that the quality of the extraction process could be controlled, and a total of eight major compounds were identified and quantified. HGF could decrease the level of serum creatinine, blood urea nitrogen, and urine protein and increase the renal index and creatinine clearance rate in a dose-dependent manner. HGF also remarkably reduced the glomerulosclerosis and tubulointerstitial fibrosis by blocking the Wnt/β-catenin signaling pathway through inhibiting the Wnt1, β-catenin, transcription factor 4, and fibronectin 1 expressions, simultaneously measured through mRNA and protein levels in the remnant kidney. These results suggest that extraction of HGF could improve remnant renal function and possibly ameliorate glomerulosclerosis and tubulointerstitial fibrosis by depressing the Wnt/β-catenin signaling pathway.

W Nelson,  Ferric Fang (2004)
The specification and proper arrangements of new cell types during tissue differentiation require the coordinated regulation of gene expression and precise interactions between neighboring cells. Of the many growth factors involved in these events, Wnts are particularly interesting regulators, because a key component of their signaling pathway, beta-catenin, also functions as a component of the cadherin complex, which controls cell-cell adhesion and influences cell migration. Here, we assemble evidence of possible interrelations between Wnt and other growth factor signaling, beta-catenin functions, and cadherin-mediated adhesion.

Fan-Gang Zeng,  Yingjian Li,  Satdarshan Monga … (2009)
Wnts compose a family of signaling proteins that play an essential role in kidney development, but their expression in adult kidney is thought to be silenced. Here, we analyzed the expression and regulation of Wnts and their receptors and antagonists in normal and fibrotic kidneys after obstructive injury. In the normal mouse kidney, the vast majority of 19 different Wnts and 10 frizzled receptor genes was expressed at various levels. After unilateral ureteral obstruction, all members of the Wnt family except Wnt5b, Wnt8b, and Wnt9b were upregulated in the fibrotic kidney with distinct dynamics. In addition, the expression of most Fzd receptors and Wnt antagonists was also induced. Obstructive injury led to a dramatic accumulation of beta-catenin in the cytoplasm and nuclei of renal tubular epithelial cells, indicating activation of the canonical pathway of Wnt signaling. Numerous Wnt/beta-catenin target genes (c-Myc, Twist, lymphoid enhancer-binding factor 1, and fibronectin) were induced, and their expression was closely correlated with renal beta-catenin abundance. Delivery of the Wnt antagonist Dickkopf-1 gene significantly reduced renal beta-catenin accumulation and inhibited the expression of Wnt/beta-catenin target genes. Furthermore, gene therapy with Dickkopf-1 inhibited myofibroblast activation; suppressed expression of fibroblast-specific protein 1, type I collagen, and fibronectin; and reduced total collagen content in the model of obstructive nephropathy. In summary, these results establish a role for Wnt/beta-catenin signaling in the pathogenesis of renal fibrosis and identify this pathway as a potential therapeutic target.

Jeremy Duffield (2014)
Fibrosis is a characteristic feature of all forms of chronic kidney disease. Deposition of pathological matrix in the interstitial space and within the walls of glomerular capillaries as well as the cellular processes resulting in this deposition are increasingly recognized as important factors amplifying kidney injury and accelerating nephron demise. Recent insights into the cellular and molecular mechanisms of fibrogenesis herald the promise of new therapies to slow kidney disease progression. This review focuses on new findings that enhance understanding of cellular and molecular mechanisms of fibrosis, the characteristics of myofibroblasts, their progenitors, and molecular pathways regulating both fibrogenesis and its resolution.