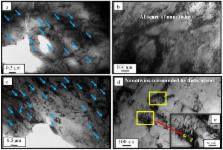 In the present work, cold rolling and cryo-rolling were performed on 99% commercially pure copper substrates. Both cold and cryo-rolling processes caused severe plastic deformation that led to an increase in dislocation density by 14× and 28× respectively, as compared to the pristine material. Increases in average tensile strengths, by 75% (488 MPa) and 150% (698 MPa), were observed in the two rolled materials as the result of the enhancement in dislocation density. In addition to strength, enhanced antibacterial property of cryo-rolled copper was observed in comparison to cold rolled and pristine copper. Initial adhesion and subsequent proliferation of bio-film forming Gram-positive bacteria Staphylococcus aureus was reduced by 66% and 100% respectively for cryo-rolled copper. Approximately 55% protein leakage, as well as ethidium bromide (EtBr) uptake, were observed confirming rupture of cell membrane of S. aureus. Inductively coupled plasma-mass spectroscopy reveals higher leaching of elemental copper in nutrient broth media from the cryo-rolled copper. Detailed investigations showed that increased dislocation led to leaching of copper ions that caused damage to the bacterial cell wall and consequently killing of bacterial cells. Cryo-rolling enhanced both strength, as well as antibacterial activity, due to the presence of dislocations.

James M Otto (2007)
Staphylococcus epidermidis and Staphylococcus aureus are the most frequent causes of nosocomial infections and infections on indwelling medical devices, which characteristically involve biofilms. Recent advances in staphylococcal molecular biology have provided more detailed insight into the basis of biofilm formation in these opportunistic pathogens. A series of surface proteins mediate initial attachment to host matrix proteins, which is followed by the expression of a cationic glucosamine-based exopolysaccharide that aggregates the bacterial cells. In some cases, proteins may function as alternative aggregating substances. Furthermore, surfactant peptides have now been recognized as key factors involved in generating the three-dimensional structure of a staphylococcal biofilm by cell-cell disruptive forces, which eventually may lead to the detachment of entire cell clusters. Transcriptional profiling experiments have defined the specific physiology of staphylococcal biofilms and demonstrated that biofilm resistance to antimicrobials is due to gene-regulated processes. Finally, novel animal models of staphylococcal biofilm-associated infection have given us important information on which factors define biofilm formation in vivo. These recent advances constitute an important basis for the development of anti-staphylococcal drugs and vaccines.

Physics and phenomenology of strain hardening: the FCC case

Nanostructuring of metals by severe plastic deformation for advanced properties.

Ruslan Valiev (2004)
Despite rosy prospects, the use of nanostructured metals and alloys as advanced structural and functional materials has remained controversial until recently. Only in recent years has a breakthrough been outlined in this area, associated both with development of new routes for the fabrication of bulk nanostructured materials and with investigation of the fundamental mechanisms that lead to the new properties of these materials. Although a deep understanding of these mechanisms is still a topic of basic research, pilot commercial products for medicine and microdevices are coming within reach of the market. This progress article discusses new concepts and principles of using severe plastic deformation (SPD) to fabricate bulk nanostructured metals with advanced properties. Special emphasis is laid on the relationship between microstructural features and properties, as well as the first applications of SPD-produced nanomaterials.