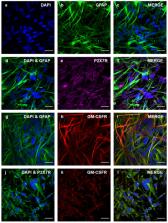 Glioblastoma is the most aggressive form of primary brain cancer, with a median survival of 12–15 months. The P2X receptor 7 (P2X7R) is upregulated in glioblastoma and is associated with increased tumor cell proliferation. The cytokine granulocyte-macrophage colony-stimulating factor (GM-CSF) is also upregulated in glioblastoma and has been shown to have both pro- and anti-tumor functions. This study investigates the potential mechanism linking P2X7R and GM-CSF in the U251 glioblastoma cell line and the therapeutic potential of P2X7R antagonism in this setting. P2X7R protein and mRNA was demonstrated to be expressed in the U251 cell line as assessed by immunocytochemistry and qPCR. Its channel function was intact as demonstrated by live cell confocal imaging using a calcium indicator Fluo-4 AM. Inhibition of P2X7R using antagonist AZ10606120, decreased both GM-CSF mRNA (P < 0.05) and protein (P < 0.01) measured by qPCR and ELISA respectively. Neutralization of GM-CSF with an anti-GM-CSF antibody did not alter U251 cell proliferation, however, P2X7R antagonism with AZ10606120 significantly reduced U251 glioblastoma cell numbers (P < 0.01). This study describes a novel link between P2X7R activity and GM-CSF expression in a human glioblastoma cell line and highlights the potential therapeutic benefit of P2X7R inhibition with AZ10606120 in glioblastoma.

Manuel Graeber,  Georg W. Kreutzberg,  B. Scheithauer (2002)
Microglia have long been ignored by neurooncologists. This has changed with the realization that microglial cells not only occur within and around brain tumors but also contribute significantly to the actual tumor mass, notably in astrocytic gliomas. In addition, it has been speculated that microglia could play a role in the defense against neoplasms of the nervous system. However, the biological success of these tumors, i.e., their highly malignant behavior, indicates that natural microglial defense mechanisms do not function properly in astrocytomas. In fact, there is evidence that microglial behavior is controlled by tumor cells, supporting their growth and infiltration. This unexpected "Achilles heel" of microglial immune defense illustrates the risk of generalizing on the basis of a single aspect of microglial biology. Microglia are highly plastic cells, capable of exerting cytotoxic functions under conditions of CNS infections, but not necessarily during glioma progression. Thus, the suggestion that microglial activation through stimulation by cytokines (e.g., interferon-gamma) will benefit patients with brain tumors could prove fatally wrong. Therapeutic recruitment of microglia to treat such diffusely infiltrative brain tumors as astrocytic gliomas must be considered premature. Copyright 2002 Wiley-Liss, Inc.

Prevalence estimates for primary brain tumors in the United States by age, gender, behavior, and histology.

Yoonsang Kim,  Sally Freels,  R Porter … (2010)
Prevalence is the best indicator of cancer survivorship in the population, but few studies have focused on brain tumor prevalence because of previous data limitations. Hence, the full impact of primary brain tumors on the healthcare system in the United States is not completely described. The present study provides an estimate of the prevalence of disease in the United States, updating an earlier prevalence study. Incidence data for 2004 and survival data for 1985-2005 were obtained by the Central Brain Tumor Registry of the United States from selected regions, modeled under 2 different survival assumptions, to estimate prevalence rates for the year 2004 and projected estimates for 2010. The overall incidence rate for primary brain tumors was 18.1 per 100 000 person-years with 2-, 5-, 10-, and 20-year observed survival rates of 62%, 54%, 45%, and 30%, respectively. On the basis of the sum of nonmalignant and averaged malignant estimates, the overall prevalence rate of individuals with a brain tumor was estimated to be 209.0 per 100 000 in 2004 and 221.8 per 100 000 in 2010. The female prevalence rate (264.8 per 100 000) was higher than that in males (158.7 per 100 000). The averaged prevalence rate for malignant tumors (42.5 per 100 000) was lower than the prevalence for nonmalignant tumors (166.5 per 100 000). This study provides estimates of the 2004 (n = 612 770) and 2010 (n = 688 096) expected number of individuals living with primary brain tumor diagnoses in the United States, providing more current and robust estimates for aiding healthcare planning and patient advocacy for an aging US population.

GM-CSF in inflammation and autoimmunity.

John Hamilton (2002)
Granulocyte macrophage-colony stimulating factor (GM-CSF) is now best viewed as a major regulator governing the functions of granulocyte and macrophage lineage populations at all stages of maturation. There is recent evidence for a key role for GM-CSF in inflammatory and autoimmune diseases, therefore making it worthy of consideration for targetting. Such evidence includes disease exacerbation following its administration and amelioration of disease in animal models by GM-CSF gene targetting or by anti-GM-CSF antibody blockade. The interdependence of GM-CSF formation and that of the important proinflammatory cytokines, interleukin-1 and tumour necrosis factor-alpha (TNF-alpha), is discussed, as is the greater disease suppression found in arthritis models following GM-CSF depletion compared with that observed in the absence of TNF-alpha.