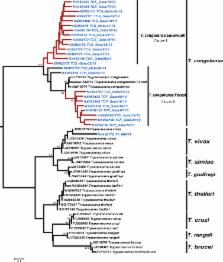 The aim of this study was to provide information on trypanosome species infecting trypanotolerant cattle from southern Gabon. The study was conducted on 224 trypanotolerant cattle from three regions located in southern Gabon, using ITS1 primer-based PCR. Seventy-two (32%) N’dama cattle were found polymerase chain reaction (PCR) positive with trypanosomes. The overall prevalence of trypanosomosis was 57% (63/110), 4% (4/100), and 36% (5/14) in the Gala section of the Nyanga ranch, the Miyama ranch, and Ossiele, respectively. Trypanosoma congolense and Trypanosoma vivax were identified. In Gala section and Ossiele, T. congolense and T. vivax were found. In the Miyama ranch, only T. vivax was identified. Mixed infections were also found. The forest (9%) and savannah (63%) subgroups of T. congolense were identified. The presence of the two subgroups was detected in 16 out of 56 cattle (29%). T. congolense and T. vivax would appear to be the main agents responsible for bovine trypanosomosis in southern Gabon. Although trypanotolerant, N’dama cattle may serve as a reservoir, and this should be further studied. On the other hand, these trypanotolerant cattle can be reared in such tsetse infested areas, which gives them an advantage compared to other trypanosensitive breeds, and this shows that they represent a key factor in biodiversity which has to be promoted.

R Lipman,  S Altschul (1990)
Protein database searches frequently can reveal biologically significant sequence relationships useful in understanding structure and function. Weak but meaningful sequence patterns can be obscured, however, by other similarities due only to chance. By searching a database for multiple as opposed to pairwise alignments, distant relationships are much more easily distinguished from background noise. Recent statistical results permit the power of this approach to be analyzed. Given a typical query sequence, an algorithm described here permits the current protein database to be searched for three-sequence alignments in less than 4 min. Such searches have revealed a variety of subtle relationships that pairwise search methods would be unable to detect.

The use of ITS1 rDNA PCR in detecting pathogenic African trypanosomes.

Alberto Dávila,  J M Kiragu,  S Guya … (2005)
There are 11 different pathogenic trypanosomes in trypanosomiasis endemic regions of Africa. Their detection and characterisation by molecular methods relies on species-specific primers; consequently several PCR tests have to be made on each sample. Primers ITS1 CF and ITS1 BR, previously designed to amplify the internal transcribed spacer (ITS1) of rDNA, have been evaluated for use in a universal diagnostic test for all pathogenic trypanosomes. Blood was collected from 373 cattle and 185 camels. The primers gave constant PCR products with the stocks of each taxon tested. Members of subgenus Trypanozoon (T. brucei brucei, T. evansi, T. b. rhodesiense and T. b. gambiense) gave a constant product of approximately 480 bp; T. congolense, savannah 700 bp, T. congolense kilifi 620 bp and T. congolense forest 710 bp: T. simiae 400 bp, T. simiae tsavo 370 bp, T. godfreyi 300 bp and T. vivax 250 bp. The sensitivity of the test ranged from 10 pg for Trypanozoon, T. congolense clade and T. vivax to 100 pg for T. simiae and T. godfreyi. The primers detected cases of multi-taxa samples, although the sensitivity was reduced with an increase in the combinations. A better detection rate of trypanosome DNA was recorded with buffy coats than from direct blood. With the field samples, the diagnostic sensitivity was close to the sensitivity obtained using single reactions with species-specific primers for Trypanozoon 38/40 (95%) and T. congolense savannah 30/33 (90.9%) but was lower with T. vivax 25/31 (77.4%). The primers offer promise as a routine diagnostic tool through the use of a single PCR; however, further evaluation is recommended.