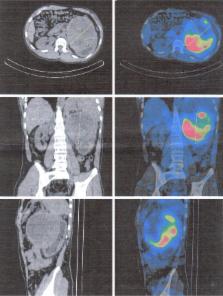 Neurofibromatosis 1 (NF1) is an autosomal-dominant disorder with various clinical expressivity and complications. Arterial hypertension may be present in patients with NF1 and is secondary to vasculopathy or pheochromocytoma. We herein describe two children (17 and 4 years old) diagnosed late with NF1 after severe arterial hypertension had been discovered due to pheochromocytoma and middle aortic syndrome. Routine measurement of arterial pressure is mandatory in children with NF1, in order to diagnose the complications of this disease.

Guidelines for the diagnosis and management of individuals with neurofibromatosis 1.

Michael Gleeson,  H Willshaw,  Celia Moss … (2007)
Neurofibromatosis 1 (NF1) is a common neurocutaneous condition with an autosomal dominant pattern of inheritance. The complications are diverse and disease expression varies, even within families. Progress in molecular biology and neuroimaging and the development of mouse models have helped to elucidate the aetiology of NF1 and its clinical manifestations. Furthermore, these advances have raised the prospect of therapeutic intervention for this complex and distressing disease. Members of the United Kingdom Neurofibromatosis Association Clinical Advisory Board collaborated to produce a consensus statement on the current guidelines for diagnosis and management of NF1. The proposals are based on published clinical studies and on the pooled knowledge of experts in neurofibromatosis with experience of providing multidisciplinary clinical and molecular services for NF1 patients. The consensus statement discusses the diagnostic criteria, major differential diagnoses, clinical manifestations and the present strategies for monitoring and management of NF1 complications.

Peter Gloviczki,  Gustavo S Oderich,  Veronica Miller … (2007)
Neurofibromatosis type I (NF-I) is an autosomal dominant disorder affecting one in 3000 individuals. Vascular abnormalities are a well-recognized manifestation of NF-I. The purpose of this study is to review the spectrum, management, and clinical outcome of patients with vascular abnormalities and NF-I. We retrospectively reviewed 31 patients (15 males, 16 females) with clinical NF-I and vascular abnormalities identified from imaging or operative findings between 1976 and 2005. The diagnosis of NF-I was made at a mean age of 11 +/- 10 years with vascular lesions identified at a mean age of 38 +/- 16 years. There were 76 vascular abnormalities, including 38 aneurysms, 20 arterial stenoses, 5 arteriovenous malformations (AVM), 5 arteries compressed or invaded by neural tumors, and 6 abnormalities of the heart valves. Arterial lesions were located in the aorta (n = 17) and in the renal (n = 12), mesenteric (n = 12), carotid-vertebral (n = 10), intracerebral (n = 4), and subclavian-axillary and iliofemoral arteries (3 each). Interventions were required in 23 patients (74%); 15 underwent 24 arterial reconstructions, including 9 renal, 8 aortic, 4 mesenteric, 2 carotid, and 1 femoral. The other eight patients had excision of AVM in three, vessel ligation in two, and clipping of cerebral aneurysms, coil embolization of hepatic aneurysms, and left thoracotomy in one patient each. One patient died of ruptured abdominal aortic aneurysm. Six patients (26%) had postoperative complications, including pneumonia in two, and stroke, acalculous cholecystitis, brachial plexopathy and chylothorax in one patient each. The median follow up was 4.1 years (range, 6 months to 20 years). Late vascular problems developed in three patients, including graft stenoses in two and rupture of another aortic aneurysm in one. Freedom from graft-related complications was 83% at 10 years. Patient survival at 10 years was 77%, less than the 86% expected survival for the general population (P < .001). Patients with NF-I have a wide spectrum of vascular abnormalities, most notably aneurysms or stenoses of the aortic, renal, and mesenteric circulation. Operative treatment of symptomatic patients with vascular lesions or large aneurysms is safe, effective, and durable.