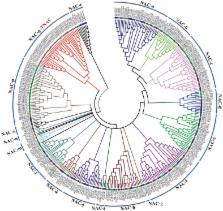 Journal: DNA Research: An International Journal for Rapid Publication of Reports on Genes and Genomes

NAC [no apical meristem (NAM), Arabidopsis thaliana transcription activation factor [ATAF1/2] and cup-shaped cotyledon (CUC2)] proteins belong to one of the largest plant-specific transcription factor (TF) families and play important roles in plant development processes, response to biotic and abiotic cues and hormone signalling. Our genome-wide analysis identified 110 StNAC genes in potato encoding for 136 proteins, including 14 membrane-bound TFs. The physical map positions of StNAC genes on 12 potato chromosomes were non-random, and 40 genes were found to be distributed in 16 clusters. The StNAC proteins were phylogenetically clustered into 12 subgroups. Phylogenetic analysis of StNACs along with their Arabidopsis and rice counterparts divided these proteins into 18 subgroups. Our comparative analysis has also identified 36 putative TNAC proteins, which appear to be restricted to Solanaceae family. In silico expression analysis, using Illumina RNA-seq transcriptome data, revealed tissue-specific, biotic, abiotic stress and hormone-responsive expression profile of StNAC genes. Several StNAC genes, including StNAC072 and StNAC101that are orthologs of known stress-responsive Arabidopsis RESPONSIVE TO DEHYDRATION 26 ( RD26) were identified as highly abiotic stress responsive. Quantitative real-time polymerase chain reaction analysis largely corroborated the expression profile of StNAC genes as revealed by the RNA-seq data. Taken together, this analysis indicates towards putative functions of several StNAC TFs, which will provide blue-print for their functional characterization and utilization in potato improvement.

D Evers,  Jean-Francois Hausman,  Nathalie Nicot … (2005)
Plant stress studies are more and more based on gene expression. The analysis of gene expression requires sensitive, precise, and reproducible measurements for specific mRNA sequences. Real-time RT-PCR is at present the most sensitive method for the detection of low abundance mRNA. To avoid bias, real-time RT-PCR is referred to one or several internal control genes, which should not fluctuate during treatments. Here, the non-regulation of seven housekeeping genes (beta-tubulin, cyclophilin, actin, elongation factor 1-alpha (ef1alpha), 18S rRNA, adenine phosphoribosyl transferase (aprt), and cytoplasmic ribosomal protein L2) during biotic (late blight) and abiotic stresses (cold and salt stress) was tested on potato plants using geNorm software. Results from the three experimental conditions indicated that ef1alpha was the most stable among the seven tested. The expression of the other housekeeping genes tested varied upon stress. In parallel, a study of the variability of expression of hsp20.2, shown to be implicated in late blight stress, was realized. The relative quantification of the hsp20.2 gene varied according to the internal control and the number of internal controls used, thus highlighting the importance of the choice of internal controls in such experiments.

Genes involved in organ separation in Arabidopsis: an analysis of the cup-shaped cotyledon mutant.

M Aida,  H Fujisawa,  T Ishida … (1997)
Mutations in CUC1 and CUC2 (for CUP-SHAPED COTYLEDON), which are newly identified genes of Arabidopsis, caused defects in the separation of cotyledons (embryonic organs), sepals, and stamens (floral organs) as well as in the formation of shoot apical meristems. These defects were most apparent in the double mutant. Phenotypes of the mutants suggest a common mechanism for separating adjacent organs within the same whorl in both embryos and flowers. We cloned the CUC2 gene and found that the encoded protein was homologous to the petunia NO APICAL MERISTEM (NAM) protein, which is thought to act in the development of embryos and flowers.

Kazuo Nakashima,  Hironori Takasaki,  Junya Mizoi … (2012)
Abiotic stresses such as drought and high salinity adversely affect the growth and productivity of plants, including crops. The development of stress-tolerant crops will be greatly advantageous for modern agriculture in areas that are prone to such stresses. In recent years, several advances have been made towards identifying potential stress related genes which are capable of increasing the tolerance of plants to abiotic stress. NAC proteins are plant-specific transcription factors and more than 100 NAC genes have been identified in Arabidopsis and rice to date. Phylogenetic analyses indicate that the six major groups were already established at least in an ancient moss lineage. NAC transcription factors have a variety of important functions not only in plant development but also in abiotic stress responses. Stress-inducible NAC genes have been shown to be involved in abiotic stress tolerance. Transgenic Arabidopsis and rice plants overexpressing stress-responsive NAC (SNAC) genes have exhibited improved drought tolerance. These studies indicate that SNAC factors have important roles for the control of abiotic stress tolerance and that their overexpression can improve stress tolerance via biotechnological approaches. Although these transcription factors can bind to the same core NAC recognition sequence, recent studies have demonstrated that the effects of NAC factors for growth are different. Moreover, the NAC proteins are capable of functioning as homo- or hetero-dimer forms. Thus, SNAC factors can be useful for improving stress tolerance in transgenic plants, although the mechanism for mediating the stress tolerance of these homologous factors is complex in plants. Recent studies also suggest that crosstalk may exist between stress responses and plant growth. This article is part of a Special Issue entitled: Plant gene regulation in response to abiotic stress. Copyright © 2011 Elsevier B.V. All rights reserved.

This is an Open Access article distributed under the terms of the Creative Commons Attribution Non-Commercial License ( http://creativecommons.org/licenses/by-nc/3.0/), which permits non-commercial re-use, distribution, and reproduction in any medium, provided the original work is properly cited. For commercial re-use, please contact journals.permissions@oup.com.