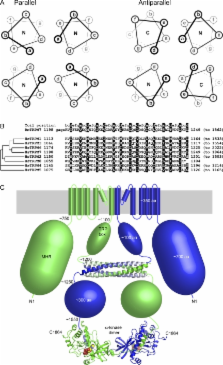 B. Campbell,  S Long,  Roderick MacKinnon (2005)
Voltage-dependent potassium ion (K+) channels (Kv channels) conduct K+ ions across the cell membrane in response to changes in the membrane voltage, thereby regulating neuronal excitability by modulating the shape and frequency of action potentials. Here we report the crystal structure, at a resolution of 2.9 angstroms, of a mammalian Kv channel, Kv1.2, which is a member of the Shaker K+ channel family. This structure is in complex with an oxido-reductase beta subunit of the kind that can regulate mammalian Kv channels in their native cell environment. The activation gate of the pore is open. Large side portals communicate between the pore and the cytoplasm. Electrostatic properties of the side portals and positions of the T1 domain and beta subunit are consistent with electrophysiological studies of inactivation gating and with the possibility of K+ channel regulation by the beta subunit.

Kartik Venkatachalam,  Craig Montell,  Thomas Voets (2007)
The TRP (Transient Receptor Potential) superfamily of cation channels is remarkable in that it displays greater diversity in activation mechanisms and selectivities than any other group of ion channels. The domain organizations of some TRP proteins are also unusual, as they consist of linked channel and enzyme domains. A unifying theme in this group is that TRP proteins play critical roles in sensory physiology, which include contributions to vision, taste, olfaction, hearing, touch, and thermo- and osmosensation. In addition, TRP channels enable individual cells to sense changes in their local environment. Many TRP channels are activated by a variety of different stimuli and function as signal integrators. The TRP superfamily is divided into seven subfamilies: the five group 1 TRPs (TRPC, TRPV, TRPM, TRPN, and TRPA) and two group 2 subfamilies (TRPP and TRPML). TRP channels are important for human health as mutations in at least four TRP channels underlie disease.

An introduction to TRP channels.

Markus Delling,  I. Ramsey,  D Clapham (2005)
The aim of this review is to provide a basic framework for understanding the function of mammalian transient receptor potential (TRP) channels, particularly as they have been elucidated in heterologous expression systems. Mammalian TRP channel proteins form six-transmembrane (6-TM) cation-permeable channels that may be grouped into six subfamilies on the basis of amino acid sequence homology (TRPC, TRPV, TRPM, TRPA, TRPP, and TRPML). Selected functional properties of TRP channels from each subfamily are summarized in this review. Although a single defining characteristic of TRP channel function has not yet emerged, TRP channels may be generally described as calcium-permeable cation channels with polymodal activation properties. By integrating multiple concomitant stimuli and coupling their activity to downstream cellular signal amplification via calcium permeation and membrane depolarization, TRP channels appear well adapted to function in cellular sensation. Our review of recent literature implicating TRP channels in neuronal growth cone steering suggests that TRPs may function more widely in cellular guidance and chemotaxis. The TRP channel gene family and its nomenclature, the encoded proteins and alternatively spliced variants, and the rapidly expanding pharmacology of TRP channels are summarized in online supplemental material.

This article is distributed under the terms of an Attribution–Noncommercial–Share Alike–No Mirror Sites license for the first six months after the publication date (see http://www.jgp.org/misc/terms.shtml). After six months it is available under a Creative Commons License (Attribution–Noncommercial–Share Alike 3.0 Unported license, as described at http://creativecommons.org/licenses/by-nc-sa/3.0/).