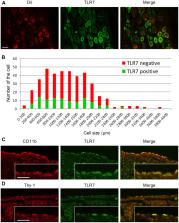 Osteoarthritis (OA) is the most prevalent joint disorder associated with severe chronic pain. Although synovial inflammation is well correlated with pain severity, the molecular mechanism responsible for OA pain remains unclear. Here, we show that extracellular miR-21 released from synovial tissue mediates knee OA pain in surgical OA model rats. miR-21 was the most abundant among increased microRNAs (miRNAs) in the synovial tissue. miR-21 was released into extracellular space from the synovial tissue and increased in the synovial fluid. A single intra-articular injection of miR-21 inhibitor exerted long-term analgesia of knee OA pain, whereas miR-21 injection in naive rats caused knee joint pain. miR-21 mutant, which lacks the Toll-like receptor (TLR) binding motif, but not in the seed sequence, did not cause joint pain, suggesting a non-canonical mode of action different from translational repression. Consistent with this, the algesic effect of miR-21 was blocked by antagonizing TLR7. The TLR7 antagonist also exerted a long-lasting analgesic effect on knee OA pain. Therefore, extracellular miR-21 released from synovial tissue mediates knee OA pain through TLR7 activation in surgical OA model rats. Extracellular miRNA in the joint may be a plausible target for pain therapy, providing a novel analgesic strategy for OA.

Franck J. Barrat, Thea Meeker, Josh Gregorio … (2005)
Raised serum levels of interferon (IFN)-α have been observed in systemic lupus erythematosus (SLE) patients, and these levels are correlated with both disease activity and severity. The origin of this IFN-α is still unclear, but increasing evidence suggests the critical involvement of activated plasmacytoid predendritic cells (PDCs). In SLE patients, DNA and RNA viruses, as well as immune complexes (ICs), that consist of autoantibodies specific to self-DNA and RNA protein particles can stimulate production of IFN-α. We have developed three series of oligonucleotide (ODN)-based inhibitors of Toll-like receptor (TLR) signaling. These ODNs include inhibitors of TLR9, inhibitors of TLR7 but not TLR9, and sequences that inhibit both TLR7 and TLR9. Specificity of these inhibitors is confirmed by inhibition of IFN-α production by PDCs in response to DNA or RNA viruses. We show that mammalian DNA and RNA, in the form of ICs, are potent self-antigens for TLR9 and TLR7, respectively, and induce IFN-α production by PDCs. This work suggests that TLRs may have a critical role in the promotion of lupus through the induction of IFN-α by PDCs. These inhibitors of TLR signaling thus represent novel therapeutic agents with potential for the treatment of lupus.