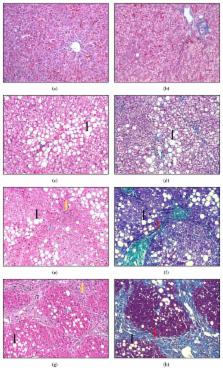 Nonalcoholic fatty liver disease (NAFLD) is characterized by hepatic steatosis, which occurs in the absence of alcohol abuse. NAFLD can evolve into progressive liver injury and fibrosis in the form of nonalcoholic steatohepatitis (NASH). Several animal models have been developed to attempt to represent the morphological, biochemical, and clinical features of human NASH. The actual review presents a critical analysis of the most commonly used experimental models of NAFLD/NASH development. These models can be classified into genetic, nutritional, and a combination of genetic and nutritional factors. The main genetic models are ob/ob and db/db mutant mice and Zucker rats. The principal nutritional models employ methionine- and choline-deficient, high-fat, high-cholesterol and high-cholate, cafeteria, and high-fructose diets. Currently, associations between high-fructose and various compositions of high-fat diets have been widely studied. Previous studies have encountered significant difficulties in developing animal models capable of reproducing human NASH. Some models produce consistent morphological findings, but the induction method differs significantly compared with the pathophysiology of human NASH. Other models precisely represent the clinical and etiological contexts of this disease but fail to provide accurate histopathological representations mainly in the progression from steatosis to liver fibrosis.

Rexford Ahima,  J Flier (1999)
The discovery of the adipose-derived hormone leptin has generated enormous interest in the interaction between peripheral signals and brain targets involved in the regulation of feeding and energy balance. Plasma leptin levels correlate with fat stores and respond to changes in energy balance. It was initially proposed that leptin serves a primary role as an anti-obesity hormone, but this role is commonly thwarted by leptin resistance. Leptin also serves as a mediator of the adaptation to fasting, and this role may be the primary function for which the molecule evolved. There is increasing evidence that leptin has systemic effects apart from those related to energy homeostasis, including regulation of neuroendocrine and immune function and a role in development.

Quentin M Anstee,  Robert Goldin (2006)
Non-alcoholic fatty liver disease (NAFLD) represents a histological spectrum of liver disease associated with obesity, diabetes and insulin resistance that extends from isolated steatosis to steatohepatitis and cirrhosis. As well as being a potential cause of progressive liver disease in its own right, steatosis has been shown to be an important cofactor in the pathogenesis of many other liver diseases. Animal models of NAFLD may be divided into two broad categories: those caused by genetic mutation and those with an acquired phenotype produced by dietary or pharmacological manipulation. The literature contains numerous different mouse models that exhibit histological evidence of hepatic steatosis or, more variably, steatohepatitis; however, few replicate the entire human phenotype. The genetic leptin-deficient (ob/ob) or leptin-resistant (db/db) mouse and the dietary methionine/choline-deficient model are used in the majority of published research. More recently, targeted gene disruption and the use of supra-nutritional diets to induce NAFLD have gained greater prominence as researchers have attempted to bridge the phenotype gap between the available models and the human disease. Using the physiological processes that underlie the pathogenesis and progression of NAFLD as a framework, we review the literature describing currently available mouse models of NAFLD, highlight the strengths and weaknesses of established models and describe the key findings that have furthered the understanding of disease pathogenesis.