Complexity As Key to Designing Cognitive-Friendly Environments for Older People 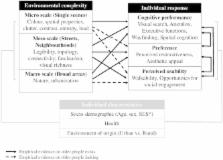 The lived environment is the arena where our cognitive skills, preferences, and attitudes come together to determine our ability to interact with the world. The mechanisms through which lived environments can benefit cognitive health in older age are yet to be fully understood. The existing literature suggests that environments which are perceived as stimulating, usable and aesthetically appealing can improve or facilitate cognitive performance both in young and older age. Importantly, optimal stimulation for cognition seems to depend on experiencing sufficiently stimulating environments while not too challenging. Environmental complexity is an important contributor to determining whether an environment provides such an optimal stimulation. The present paper reviews a selection of studies which have explored complexity in relation to perceptual load, environmental preference and perceived usability to propose a framework which explores direct and indirect environmental influences on cognition, and to understand these influences in relation to aging processes. We identify ways to define complexity at different environmental scales, going from micro low-level perceptual features of scenes, to design qualities of proximal environments (e.g., streets, neighborhoods), to broad geographical areas (i.e., natural vs. urban environments). We propose that studying complexity at these different scales will provide new insight into the design of cognitive-friendly environments.

Social capital and the built environment: the importance of walkable neighborhoods.

Christian Kothe,  Thorsten Zander (2011)
Cognitive monitoring is an approach utilizing realtime brain signal decoding (RBSD) for gaining information on the ongoing cognitive user state. In recent decades this approach has brought valuable insight into the cognition of an interacting human. Automated RBSD can be used to set up a brain-computer interface (BCI) providing a novel input modality for technical systems solely based on brain activity. In BCIs the user usually sends voluntary and directed commands to control the connected computer system or to communicate through it. In this paper we propose an extension of this approach by fusing BCI technology with cognitive monitoring, providing valuable information about the users' intentions, situational interpretations and emotional states to the technical system. We call this approach passive BCI. In the following we give an overview of studies which utilize passive BCI, as well as other novel types of applications resulting from BCI technology. We especially focus on applications for healthy users, and the specific requirements and demands of this user group. Since the presented approach of combining cognitive monitoring with BCI technology is very similar to the concept of BCIs itself we propose a unifying categorization of BCI-based applications, including the novel approach of passive BCI.