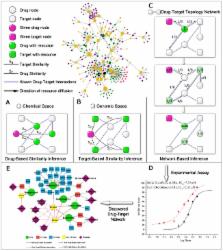 Drug-target interaction (DTI) is the basis of drug discovery and design. It is time consuming and costly to determine DTI experimentally. Hence, it is necessary to develop computational methods for the prediction of potential DTI. Based on complex network theory, three supervised inference methods were developed here to predict DTI and used for drug repositioning, namely drug-based similarity inference (DBSI), target-based similarity inference (TBSI) and network-based inference (NBI). Among them, NBI performed best on four benchmark data sets. Then a drug-target network was created with NBI based on 12,483 FDA-approved and experimental drug-target binary links, and some new DTIs were further predicted. In vitro assays confirmed that five old drugs, namely montelukast, diclofenac, simvastatin, ketoconazole, and itraconazole, showed polypharmacological features on estrogen receptors or dipeptidyl peptidase-IV with half maximal inhibitory or effective concentration ranged from 0.2 to 10 µM. Moreover, simvastatin and ketoconazole showed potent antiproliferative activities on human MDA-MB-231 breast cancer cell line in MTT assays. The results indicated that these methods could be powerful tools in prediction of DTIs and drug repositioning.

Study of drug-target interaction is an important topic toward elucidation of protein functions and understanding of molecular mechanisms inside cells. Traditional methods to predict new targets for known drugs were based on small molecules, protein targets or phenotype features. Here, we proposed a network-based inference (NBI) method which only used drug-target bipartite network topology similarity to infer new targets for known drugs. The performance of NBI outperformed the drug-based similarity inference and target-based similarity inference methods as well as other published methods. Via the NBI method five old drugs, namely montelukast, diclofenac, simvastatin, ketoconazole, and itraconazole, were identified to have polypharmacological effects on human estrogen receptors or dipeptidyl peptidase-IV with half maximal inhibitory or effective concentration from submicromolar to micromolar by in vitro assays. Moreover, simvastatin and ketoconazole showed potent antiproliferative activities on human MDA-MB-231 breast cancer cell line in MTT assays. The results indicated that the drug-target bipartite network-based inference method could be a useful tool for fishing novel drug-target interactions in molecular polypharmacological space.

Xuebing Wu,  Rui Jiang,  Michael Zhang … (2008)
Deciphering the genetic basis of human diseases is an important goal of biomedical research. On the basis of the assumption that phenotypically similar diseases are caused by functionally related genes, we propose a computational framework that integrates human protein–protein interactions, disease phenotype similarities, and known gene–phenotype associations to capture the complex relationships between phenotypes and genotypes. We develop a tool named CIPHER to predict and prioritize disease genes, and we show that the global concordance between the human protein network and the phenotype network reliably predicts disease genes. Our method is applicable to genetically uncharacterized phenotypes, effective in the genome-wide scan of disease genes, and also extendable to explore gene cooperativity in complex diseases. The predicted genetic landscape of over 1000 human phenotypes, which reveals the global modular organization of phenotype–genotype relationships. The genome-wide prioritization of candidate genes for over 5000 human phenotypes, including those with under-characterized disease loci or even those lacking known association, is publicly released to facilitate future discovery of disease genes.

Publisher ID: PCOMPBIOL-D-11-01829
DOI: 10.1371/journal.pcbi.1002503
PMC ID: 3349722
PubMed ID: 22589709
Copyright statement: Cheng et al. This is an open-access article distributed under the terms of the Creative Commons Attribution License, which permits unrestricted use, distribution, and reproduction in any medium, provided the original author and source are credited.