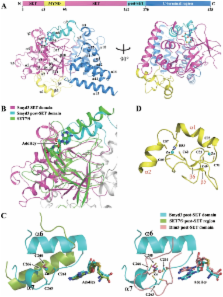 The SET- and MYND-domain containing (Smyd) proteins constitute a special subfamily of the SET-containing lysine methyltransferases. Here we present the structure of full-length human Smyd3 in complex with S-adenosyl- l-homocysteine at 2.8 Å resolution. Smyd3 affords the first example that other region(s) besides the SET domain and its flanking regions participate in the formation of the active site. Structural analysis shows that the previously uncharacterized C-terminal domain of Smyd3 contains a tetratrico-peptide repeat (TPR) domain which together with the SET and post-SET domains forms a deep, narrow substrate binding pocket. Our data demonstrate the important roles of both TPR and post-SET domains in the histone lysine methyltransferase (HKMT) activity of Smyd3, and show that the hydroxyl group of Tyr239 is critical for the enzymatic activity. The characteristic MYND domain is located nearby to the substrate binding pocket and exhibits a largely positively charged surface. Further biochemical assays show that DNA binding of Smyd3 can stimulate its HKMT activity and the process may be mediated via the MYND domain through direct DNA binding.

Jenny C. Martin,  Yi Zhang (2005)
Covalent modifications of histone tails have fundamental roles in chromatin structure and function. One such modification, lysine methylation, has important functions in many biological processes that include heterochromatin formation, X-chromosome inactivation and transcriptional regulation. Here, we summarize recent advances in our understanding of how lysine methylation functions in these diverse biological processes, and raise questions that need to be addressed in the future.

Structure of TPR domain-peptide complexes: critical elements in the assembly of the Hsp70-Hsp90 multichaperone machine.

G Bourenkov,  F. Ulrich Hartl,  L Moroder … (2000)
The adaptor protein Hop mediates the association of the molecular chaperones Hsp70 and Hsp90. The TPR1 domain of Hop specifically recognizes the C-terminal heptapeptide of Hsp70 while the TPR2A domain binds the C-terminal pentapeptide of Hsp90. Both sequences end with the motif EEVD. The crystal structures of the TPR-peptide complexes show the peptides in an extended conformation, spanning a groove in the TPR domains. Peptide binding is mediated by electrostatic interactions with the EEVD motif, with the C-terminal aspartate acting as a two-carboxylate anchor, and by hydrophobic interactions with residues upstream of EEVD. The hydrophobic contacts with the peptide are critical for specificity. These results explain how TPR domains participate in the ordered assembly of Hsp70-Hsp90 multichaperone complexes.

SMYD3 encodes a histone methyltransferase involved in the proliferation of cancer cells.

Yoichi Furukawa,  Juneo Silva,  Meihua Li … (2004)
Colorectal and hepatocellular carcinomas are some of the leading causes of cancer deaths worldwide, but the mechanisms that underly these malignancies are not fully understood. Here we report the identification of SMYD3, a gene that is over-expressed in the majority of colorectal carcinomas and hepatocellular carcinomas. Introduction of SMYD3 into NIH3T3 cells enhanced cell growth, whereas genetic knockdown with small-interfering RNAs (siRNAs) in cancer cells resulted in significant growth suppression. SMYD3 formed a complex with RNA polymerase II through an interaction with the RNA helicase HELZ and transactivated a set of genes that included oncogenes, homeobox genes and genes associated with cell-cycle regulation. SMYD3 bound to a motif, 5'-CCCTCC-3', present in the promoter region of downstream genes such as Nkx2.8. The SET domain of SMYD3 showed histone H3-lysine 4 (H3-K4)-specific methyltransferase activity, which was enhanced in the presence of the heat-shock protein HSP90A. Our findings suggest that SMYD3 has histone methyltransferase activity and plays an important role in transcriptional regulation as a member of an RNA polymerase complex. Furthermore, activation of SMYD3 may be a key factor in human carcinogenesis.