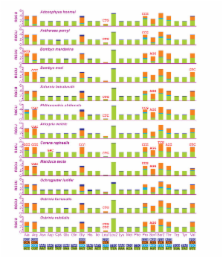 Knowledge of animal mitochondrial genomes is very important to understand their molecular evolution as well as for phylogenetic and population genetic studies. The Lepidoptera encompasses more than 160,000 described species and is one of the largest insect orders. To date only nine lepidopteran mitochondrial DNAs have been fully and two others partly sequenced. Furthermore the taxon sampling is very scant. Thus advance of lepidopteran mitogenomics deeply requires new genomes derived from a broad taxon sampling. In present work we describe the mitochondrial genome of the moth Ochrogaster lunifer.

The mitochondrial genome of O. lunifer is a circular molecule 15593 bp long. It includes the entire set of 37 genes usually present in animal mitochondrial genomes. It contains also 7 intergenic spacers. The gene order of the newly sequenced genome is that typical for Lepidoptera and differs from the insect ancestral type for the placement of trnM. The 77.84% A+T content of its α strand is the lowest among known lepidopteran genomes. The mitochondrial genome of O. lunifer exhibits one of the most marked C-skew among available insect Pterygota genomes. The protein-coding genes have typical mitochondrial start codons except for cox1 that present an unusual CGA. The O. lunifer genome exhibits the less biased synonymous codon usage among lepidopterans. Comparative genomics analysis study identified atp6, cox1, cox2 as cox3, cob, nad1, nad2, nad4, and nad5 as potential markers for population genetics/phylogenetics studies. A peculiar feature of O. lunifer mitochondrial genome it that the intergenic spacers are mostly made by repetitive sequences.

The mitochondrial genome of O. lunifer is the first representative of superfamily Noctuoidea that account for about 40% of all described Lepidoptera. New genome shares many features with other known lepidopteran genomes. It differs however for its low A+T content and marked C-skew. Compared to other lepidopteran genomes it is less biased in synonymous codon usage. Comparative evolutionary analysis of lepidopteran mitochondrial genomes allowed the identification of previously neglected coding genes as potential phylogenetic markers. Presence of repetitive elements in intergenic spacers of O. lunifer genome supports the role of DNA slippage as possible mechanism to produce spacers during replication.

The 'effective number of codons' used in a gene.

Elaine Wright (1990)
A simple measure is presented that quantifies how far the codon usage of a gene departs from equal usage of synonymous codons. This measure of synonymous codon usage bias, the 'effective number of codons used in a gene', Nc, can be easily calculated from codon usage data alone, and is independent of gene length and amino acid (aa) composition. Nc can take values from 20, in the case of extreme bias where one codon is exclusively used for each aa, to 61 when the use of alternative synonymous codons is equally likely. Nc thus provides an intuitively meaningful measure of the extent of codon preference in a gene. Codon usage patterns across genes can be investigated by the Nc-plot: a plot of Nc vs. G + C content at synonymous sites. Nc-plots are produced for Homo sapiens, Saccharomyces cerevisiae, Escherichia coli, Bacillus subtilis, Dictyostelium discoideum, and Drosophila melanogaster. A FORTRAN77 program written to calculate Nc is available on request.

Mehrdad Hajibabaei,  Winnie Hallwachs,  Paul Hebert … (2006)
Although central to much biological research, the identification of species is often difficult. The use of DNA barcodes, short DNA sequences from a standardized region of the genome, has recently been proposed as a tool to facilitate species identification and discovery. However, the effectiveness of DNA barcoding for identifying specimens in species-rich tropical biotas is unknown. Here we show that cytochrome c oxidase I DNA barcodes effectively discriminate among species in three Lepidoptera families from Area de Conservación Guanacaste in northwestern Costa Rica. We found that 97.9% of the 521 species recognized by prior taxonomic work possess distinctive cytochrome c oxidase I barcodes and that the few instances of interspecific sequence overlap involve very similar species. We also found two or more barcode clusters within each of 13 supposedly single species. Covariation between these clusters and morphological and/or ecological traits indicates overlooked species complexes. If these results are general, DNA barcoding will significantly aid species identification and discovery in tropical settings.

Tatiana Tatusova,  Thomas Madden (1999)
'BLAST 2 Sequences', a new BLAST-based tool for aligning two protein or nucleotide sequences, is described. While the standard BLAST program is widely used to search for homologous sequences in nucleotide and protein databases, one often needs to compare only two sequences that are already known to be homologous, coming from related species or, e.g. different isolates of the same virus. In such cases searching the entire database would be unnecessarily time-consuming. 'BLAST 2 Sequences' utilizes the BLAST algorithm for pairwise DNA-DNA or protein-protein sequence comparison. A World Wide Web version of the program can be used interactively at the NCBI WWW site (http://www.ncbi.nlm.nih.gov/gorf/bl2.++ +html). The resulting alignments are presented in both graphical and text form. The variants of the program for PC (Windows), Mac and several UNIX-based platforms can be downloaded from the NCBI FTP site (ftp://ncbi.nlm.nih.gov).