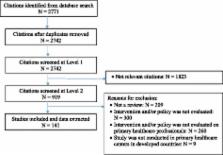 Data extraction and synthesis: two reviewers extracted data pertaining to the types of reviews, study designs, number of studies, demographics of the professionals enrolled, interventions, outcomes, and authors’ conclusions for the included studies. We evaluated the methodological quality of the included studies using the AMSTAR scale. For the comparative evaluation, we classified interventions according to the behavior change wheel (Michie et al.).

Of 2771 citations retrieved, we included 138 reviews representing 3502 individual studies. The majority of systematic reviews (91%) investigated behavior and practice changes among family physicians. Interactive and multifaceted continuous medical education programs, training with audit and feedback, and clinical decision support systems were found to be beneficial in improving knowledge, optimizing screening rate and prescriptions, enhancing patient outcomes, and reducing adverse events. Collaborative team-based policies involving primarily family physicians, nurses, and pharmacists were found to be most effective. Available evidence on environmental restructuring and modeling was found to be effective in improving collaboration and adherence to treatment guidelines. Limited evidence on nurse-led care approaches were found to be as effective as general practitioners in patient satisfaction in settings like asthma, cardiovascular, and diabetes clinics, although this needs further evaluation. Evidence does not support the use of financial incentives to family physicians, especially for long-term behavior change.

Changing provider behavior: an overview of systematic reviews of interventions.

G Mowatt,  L Shirran,  E Harvey … (2001)
Increasing recognition of the failure to translate research findings into practice has led to greater awareness of the importance of using active dissemination and implementation strategies. Although there is a growing body of research evidence about the effectiveness of different strategies, this is not easily accessible to policy makers and professionals. To identify, appraise, and synthesize systematic reviews of professional educational or quality assurance interventions to improve quality of care. An overview was made of systematic reviews of professional behavior change interventions published between 1966 and 1998. Forty-one reviews were identified covering a wide range of interventions and behaviors. In general, passive approaches are generally ineffective and unlikely to result in behavior change. Most other interventions are effective under some circumstances; none are effective under all circumstances. Promising approaches include educational outreach (for prescribing) and reminders. Multifaceted interventions targeting different barriers to change are more likely to be effective than single interventions. Although the current evidence base is incomplete, it provides valuable insights into the likely effectiveness of different interventions. Future quality improvement or educational activities should be informed by the findings of systematic reviews of professional behavior change interventions.

Jeremy M. Grimshaw,  Vandana Sundaram,  Kristin K. McDonald … (2006)
There have been numerous reports of interventions designed to improve the care of patients with diabetes, but the effectiveness of such interventions is unclear. To assess the impact on glycemic control of 11 distinct strategies for quality improvement (QI) in adults with type 2 diabetes. MEDLINE (1966-April 2006) and the Cochrane Collaboration's Effective Practice and Organisation of Care Group database, which covers multiple bibliographic databases. Eligible studies included randomized or quasi-randomized controlled trials and controlled before-after studies that evaluated a QI intervention targeting some aspect of clinician behavior or organizational change and reported changes in glycosylated hemoglobin (HbA1c) values. Postintervention difference in HbA1c values were estimated using a meta-regression model that included baseline glycemic control and other key intervention and study features as predictors. Fifty randomized controlled trials, 3 quasi-randomized trials, and 13 controlled before-after trials met all inclusion criteria. Across these 66 trials, interventions reduced HbA(1c) values by a mean of 0.42% (95% confidence interval [CI], 0.29%-0.54%) over a median of 13 months of follow-up. Trials with fewer patients than the median for all included trials reported significantly greater effects than did larger trials (0.61% vs 0.27%, P = .004), strongly suggesting publication bias. Trials with mean baseline HbA1c values of 8.0% or greater also reported significantly larger effects (0.54% vs 0.20%, P = .005). Adjusting for these effects, 2 of the 11 categories of QI strategies were associated with reductions in HbA(1c) values of at least 0.50%: team changes (0.67%; 95% CI, 0.43%-0.91%; n = 26 trials) and case management (0.52%; 95% CI, 0.31%-0.73%; n = 26 trials); these also represented the only 2 strategies conferring significant incremental reductions in HbA1c values. Interventions involving team changes reduced values by 0.33% more (95% CI, 0.12%-0.54%; P = .004) than those without this strategy, and those involving case management reduced values by 0.22% more (95% CI, 0.00%-0.44%; P = .04) than those without case management. Interventions in which nurse or pharmacist case managers could make medication adjustments without awaiting physician authorization reduced values by 0.80% (95% CI, 0.51%-1.10%), vs only 0.32% (95% CI, 0.14%-0.49%) for all other interventions (P = .002). Most QI strategies produced small to modest improvements in glycemic control. Team changes and case management showed more robust improvements, especially for interventions in which case managers could adjust medications without awaiting physician approval. Estimates of the effectiveness of other specific QI strategies may have been limited by difficulty in classifying complex interventions, insufficient numbers of studies, and publication bias.

Interventions that can reduce inappropriate prescribing in the elderly: a systematic review.