Insights into Animal and Plant Lectins with Antimicrobial Activities 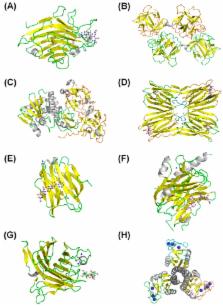 Lectins are multivalent proteins with the ability to recognize and bind diverse carbohydrate structures. The glyco -binding and diverse molecular structures observed in these protein classes make them a large and heterogeneous group with a wide range of biological activities in microorganisms, animals and plants. Lectins from plants and animals are commonly used in direct defense against pathogens and in immune regulation. This review focuses on sources of animal and plant lectins, describing their functional classification and tridimensional structures, relating these properties with biotechnological purposes, including antimicrobial activities. In summary, this work focuses on structural-functional elucidation of diverse lectin groups, shedding some light on host-pathogen interactions; it also examines their emergence as biotechnological tools through gene manipulation and development of new drugs.

Jill Gready,  Alex Zelensky (2005)
The superfamily of proteins containing C-type lectin-like domains (CTLDs) is a large group of extracellular Metazoan proteins with diverse functions. The CTLD structure has a characteristic double-loop ('loop-in-a-loop') stabilized by two highly conserved disulfide bridges located at the bases of the loops, as well as a set of conserved hydrophobic and polar interactions. The second loop, called the long loop region, is structurally and evolutionarily flexible, and is involved in Ca2+-dependent carbohydrate binding and interaction with other ligands. This loop is completely absent in a subset of CTLDs, which we refer to as compact CTLDs; these include the Link/PTR domain and bacterial CTLDs. CTLD-containing proteins (CTLDcps) were originally classified into seven groups based on their overall domain structure. Analyses of the superfamily representation in several completely sequenced genomes have added 10 new groups to the classification, and shown that it is applicable only to vertebrate CTLDcps; despite the abundance of CTLDcps in the invertebrate genomes studied, the domain architectures of these proteins do not match those of the vertebrate groups. Ca2+-dependent carbohydrate binding is the most common CTLD function in vertebrates, and apparently the ancestral one, as suggested by the many humoral defense CTLDcps characterized in insects and other invertebrates. However, many CTLDs have evolved to specifically recognize protein, lipid and inorganic ligands, including the vertebrate clade-specific snake venoms, and fish antifreeze and bird egg-shell proteins. Recent studies highlight the functional versatility of this protein superfamily and the CTLD scaffold, and suggest further interesting discoveries have yet to be made.

History of lectins: from hemagglutinins to biological recognition molecules.

Nathan Sharon,  Halina Lis (2004)
The occurrence in nature of erythrocyte-agglutinating proteins has been known since the turn of the 19th century. By the 1960s it became apparent that such proteins also agglutinate other types of cells, and that many of them are sugar-specific. These cell-agglutinating and sugar-specific proteins have been named lectins. Although shown to occur widely in plants and to some extent also in invertebrates, very few lectins had been isolated until the early 1970s, and they had attracted little attention. This attitude changed with the demonstration that lectins are extremely useful tools for the investigation of carbohydrates on cell surfaces, in particular of the changes that the latter undergo in malignancy, as well as for the isolation and characterization of glycoproteins. In subsequent years numerous lectins have been isolated from plants as well as from microorganisms and animals, and during the past two decades the structures of hundreds of them have been established. Concurrently, it was shown that lectins function as recognition molecules in cell-molecule and cell-cell interactions in a variety of biological systems. Here we present a brief account of 100-plus years of lectin research and show how these proteins have become the focus of intense interest for biologists and in particular for the glycobiologists among them.

W Weis,  K Drickamer (1995)
Lectins are responsible for cell surface sugar recognition in bacteria, animals, and plants. Examples include bacterial toxins; animal receptors that mediate cell-cell interactions, uptake of glycoconjugates, and pathogen neutralization; and plant toxins and mitogens. The structural basis for selective sugar recognition by members of all of these groups has been investigated by x-ray crystallography. Mechanisms for sugar recognition have evolved independently in diverse protein structural frameworks, but share some key features. Relatively low affinity binding sites for monosaccharides are formed at shallow indentations on protein surfaces. Selectivity is achieved through a combination of hydrogen bonding to the sugar hydroxyl groups with van der Waals packing, often including packing of a hydrophobic sugar face against aromatic amino acid side chains. Higher selectivity of binding is achieved by extending binding sites through additional direct and water-mediated contacts between oligosaccharides and the protein surface. Dramatically increased affinity for oligosaccharides results from clustering of simple binding sites in oligomers of the lectin polypeptides. The geometry of such oligomers helps to establish the ability of the lectins to distinguish surface arrays of polysaccharides in some instances and to crosslink glycoconjugates in others.

Licensee MDPI, Basel, Switzerland. This article is an open access article distributed under the terms and conditions of the Creative Commons Attribution license ( http://creativecommons.org/licenses/by/4.0/).