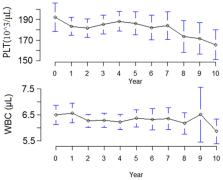 Mervyn Singer,  Clifford S Deutschman,  Christopher Warren Seymour … (2016)
Definitions of sepsis and septic shock were last revised in 2001. Considerable advances have since been made into the pathobiology (changes in organ function, morphology, cell biology, biochemistry, immunology, and circulation), management, and epidemiology of sepsis, suggesting the need for reexamination.

Epidemiological features of CKD in Taiwan.

Shang-Shyue Tsai,  Yuh-Shyong Yang,  Sung-Hsin Kuo … (2006)
The incidence of end-stage renal disease (ESRD) in Taiwan is the highest in the world. However, epidemiological features of earlier chronic kidney disease (CKD) have not been investigated. Since implementation of the National Health Insurance Program in 1995, more than 96% of the population in Taiwan has been enrolled. A nationally representative cohort of 200,000 individuals randomly sampled from the National Health Insurance enrollees was followed up from 1996 to 2003. Clinical conditions were defined by using diagnostic codes. The prevalence and incidence of clinically recognized CKD were assessed. We also identified risk factors associated with the development of CKD. The prevalence of clinically recognized CKD increased from 1.99% in 1996 to 9.83% in 2003. The overall incidence rate during 1997 to 2003 was 1.35/100 person-years. The multivariate model indicates that age is a key predictor of CKD, with an odds ratio of 13.95 for the group aged 75-plus years compared with the group younger than 20 years. Other factors associated with increased risk for the development of CKD include diabetes, hypertension, hyperlipidemia, and female sex. The prevalence and incidence of CKD in Taiwan are relatively high compared with other countries. Our finding provides a reasonable explanation for the subsequent epidemic of ESRD in Taiwan. Further study is needed to identify the entire burden of CKD and the effectiveness of risk-factor modification.

Giulio Genovese,  Anna K. Kähler,  Robert Handsaker … (2014)
Cancers arise from multiple acquired mutations, which presumably occur over many years. Early stages in cancer development might be present years before cancers become clinically apparent. We analyzed data from whole-exome sequencing of DNA in peripheral-blood cells from 12,380 persons, unselected for cancer or hematologic phenotypes. We identified somatic mutations on the basis of unusual allelic fractions. We used data from Swedish national patient registers to follow health outcomes for 2 to 7 years after DNA sampling. Clonal hematopoiesis with somatic mutations was observed in 10% of persons older than 65 years of age but in only 1% of those younger than 50 years of age. Detectable clonal expansions most frequently involved somatic mutations in three genes (DNMT3A, ASXL1, and TET2) that have previously been implicated in hematologic cancers. Clonal hematopoiesis was a strong risk factor for subsequent hematologic cancer (hazard ratio, 12.9; 95% confidence interval, 5.8 to 28.7). Approximately 42% of hematologic cancers in this cohort arose in persons who had clonality at the time of DNA sampling, more than 6 months before a first diagnosis of cancer. Analysis of bone marrow-biopsy specimens obtained from two patients at the time of diagnosis of acute myeloid leukemia revealed that their cancers arose from the earlier clones. Clonal hematopoiesis with somatic mutations is readily detected by means of DNA sequencing, is increasingly common as people age, and is associated with increased risks of hematologic cancer and death. A subset of the genes that are mutated in patients with myeloid cancers is frequently mutated in apparently healthy persons; these mutations may represent characteristic early events in the development of hematologic cancers. (Funded by the National Human Genome Research Institute and others.).

This article was submitted to Nephrology, a section of the journal Frontiers in Medicine