The segetal flora of Italy: an occurrence dataset from relevés in winter cereals and allied crop types 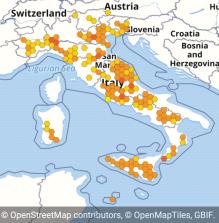 The segetal flora of winter crops includes mostly native or archaeophyte annual species that are often strong specialists of their habitats. Threatened by the intensification of agriculture, segetal flora is particularly valuable from a perspective of biodiversity conservation and evolution. Moreover, it contributes to maintain biodiversity in agroecosystems and provides several ecosystem services. The dataset here described was set up to provide the first inventory of the segetal flora of Italian winter cereal crops and allied crop types, the latter including flax and autumn-sown legumes. It includes 24,676 georeferenced occurrence data deriving from 1,240 floristic and phytosociological relevés. The data were collected from the greater part of Italian territory, in a temporal range spanning from 1946 to 2018.

The role of weeds in supporting biological diversity within crop fields*

An updated checklist of the vascular flora native to Italy

The impact of agricultural intensification and land-use change on the European arable flora.

J Storkey,  S. Meyer,  K S Still … (2012)
The impact of crop management and agricultural land use on the threat status of plants adapted to arable habitats was analysed using data from Red Lists of vascular plants assessed by national experts from 29 European countries. There was a positive relationship between national wheat yields and the numbers of rare, threatened or recently extinct arable plant species in each country. Variance in the relative proportions of species in different threat categories was significantly explained using a combination of fertilizer and herbicide use, with a greater percentage of the variance partitioned to fertilizers. Specialist species adapted to individual crops, such as flax, are among the most threatened. These species have declined across Europe in response to a reduction in the area grown for the crops on which they rely. The increased use of agro-chemicals, especially in central and northwestern Europe, has selected against a larger group of species adapted to habitats with intermediate fertility. There is an urgent need to implement successful conservation strategies to arrest the decline of this functionally distinct and increasingly threatened component of the European flora.