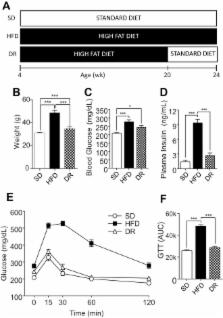 Publisher: The Company of Biologists Ltd

Patients with metabolic syndrome, which is defined as obesity, dyslipidemia, hypertension and impaired glucose tolerance (IGT), can develop the same macro- and microvascular complications as patients with type 2 diabetes, including peripheral neuropathy. In type 2 diabetes, glycemic control has little effect on the development and progression of peripheral neuropathy, suggesting that other metabolic syndrome components may contribute to the presence of neuropathy. A parallel phenomenon is observed in patients with prediabetes and metabolic syndrome, where improvement in weight and dyslipidemia more closely correlates with restoration of nerve function than improvement in glycemic status. The goal of the current study was to develop a murine model that resembles the human condition. We examined longitudinal parameters of metabolic syndrome and neuropathy development in six mouse strains/genotypes (BKS- wt, BKS- Lepr db/+ , B6- wt, B6- Lepr db/+ , BTBR- wt, and BTBR -Lep ob/+ ) fed a 54% high-fat diet (HFD; from lard). All mice fed a HFD developed large-fiber neuropathy and IGT. Changes appeared early and consistently in B6- wt mice, and paralleled the onset of neuropathy. At 36 weeks, B6- wt mice displayed all components of the metabolic syndrome, including obesity, IGT, hyperinsulinemia, dyslipidemia and oxidized low density lipoproteins (oxLDLs). Dietary reversal, whereby B6- wt mice fed a HFD from 4-20 weeks of age were switched to standard chow for 4 weeks, completely normalized neuropathy, promoted weight loss, improved insulin sensitivity, and restored LDL cholesterol and oxLDL by 50% compared with levels in HFD control mice. This dietary reversal model provides the basis for mechanistic studies investigating peripheral nerve damage in the setting of metabolic syndrome, and ultimately the development of mechanism-based therapies for neuropathy.

Summary: A mouse model of metabolic syndrome can be used to investigate peripheral nerve damage, enabling the development of mechanism-based therapies for neuropathy.

Guidelines for the design and statistical analysis of experiments using laboratory animals.

Doug G. Altman,  Michael Festing (2001)
For ethical and economic reasons, it is important to design animal experiments well, to analyze the data correctly, and to use the minimum number of animals necessary to achieve the scientific objectives---but not so few as to miss biologically important effects or require unnecessary repetition of experiments. Investigators are urged to consult a statistician at the design stage and are reminded that no experiment should ever be started without a clear idea of how the resulting data are to be analyzed. These guidelines are provided to help biomedical research workers perform their experiments efficiently and analyze their results so that they can extract all useful information from the resulting data. Among the topics discussed are the varying purposes of experiments (e.g., exploratory vs. confirmatory); the experimental unit; the necessity of recording full experimental details (e.g., species, sex, age, microbiological status, strain and source of animals, and husbandry conditions); assigning experimental units to treatments using randomization; other aspects of the experiment (e.g., timing of measurements); using formal experimental designs (e.g., completely randomized and randomized block); estimating the size of the experiment using power and sample size calculations; screening raw data for obvious errors; using the t-test or analysis of variance for parametric analysis; and effective design of graphical data.

Ulrika Pettersson,  Tomas B. Waldén,  Per-Ola Carlsson … (2012)
Sex differences in obesity-induced complications such as type 2 diabetes have been reported. The aim of the study was to pinpoint the mechanisms resulting in different outcome of female and male mice on a high-fat diet (HFD). Mice fed control or HFD were monitored for weight, blood glucose, and insulin for 14 weeks. Circulating chemokines, islet endocrine function and blood flow, as well as adipose tissue populations of macrophages and regulatory T-lymphocytes (Treg) were thereafter assessed. Despite similar weight (43.8±1.0 and 40.2±1.5 g, respectively), male but not female mice developed hyperinsulinemia on HFD as previously described (2.5±0.7 and 0.5±0.1 pmol/l, respectively) consistent with glucose intolerance. Male mice also exhibited hypertrophic islets with intact function in terms of insulin release and blood perfusion. Low-grade, systemic inflammation was absent in obese female but present in obese male mice (IL-6 and mKC, males: 77.4±17 and 1795±563; females: 14.6±4.9 and 240±22 pg/ml), and the population of inflammatory macrophages was increased in intra-abdominal adipose tissues of high-fat-fed male but not female mice. In contrast, the anti-inflammatory Treg cell population increased in the adipose tissue of female mice in response to weight gain, while the number decreased in high-fat-fed male mice. In conclusion, female mice are protected against HFD-induced metabolic changes while maintaining an anti-inflammatory environment in the intra-abdominal adipose tissue with expanded Treg cell population, whereas HFD-fed male mice develop adipose tissue inflammation, glucose intolerance, hyperinsulinemia, and islet hypertrophy.

Quantifying size and number of adipocytes in adipose tissue.

Hiroyuki Mori,  Ormond MacDougald,  Sebastian D. Parlee … (2013)
White adipose tissue (WAT) is a dynamic and modifiable tissue that develops late during gestation in humans and through early postnatal development in rodents. WAT is unique in that it can account for as little as 3% of total body weight in elite athletes or as much as 70% in the morbidly obese. With the development of obesity, WAT undergoes a process of tissue remodeling in which adipocytes increase in both number (hyperplasia) and size (hypertrophy). Metabolic derangements associated with obesity, including type 2 diabetes, occur when WAT growth through hyperplasia and hypertrophy cannot keep pace with the energy storage needs associated with chronic energy excess. Accordingly, hypertrophic adipocytes become overburdened with lipids, resulting in changes in the secreted hormonal milieu. Lipids that cannot be stored in the engorged adipocytes become ectopically deposited in organs such as the liver, muscle, and pancreas. WAT remodeling therefore coincides with obesity and secondary metabolic diseases. Obesity, however, is not unique in causing WAT remodeling: changes in adiposity also occur with aging, calorie restriction, cancers, and diseases such as HIV infection. In this chapter, we describe a semiautomated method of quantitatively analyzing the histomorphometry of WAT using common laboratory equipment. With this technique, the frequency distribution of adipocyte sizes across the tissue depot and the number of total adipocytes per depot can be estimated by counting as few as 100 adipocytes per animal. In doing so, the method described herein is a useful tool for accurately quantifying WAT development, growth, and remodeling. © 2014 Elsevier Inc. All rights reserved.