Effects of loratadine, a histamine H 1 receptor antagonist, on the skeletal system of young male rats 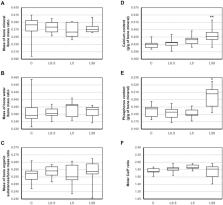 Histamine H 1 receptor antagonists are widely used in the treatment of allergic diseases. H 1 receptors are expressed on bone cells and histamine takes part in regulation of bone metabolism. Loratadine is often prescribed to children.

The aim of the present study was to investigate the effects of loratadine on the skeletal system of young rats.

Loratadine (0.5, 5, and 50 mg/kg p.o. daily) was administered for 4 weeks to male Wistar rats, 6-week-old at the start of the experiment. Bone mass, mass of bone mineral, calcium, and phosphorus content in the bone mineral of the tibia, femur, and L-4 vertebra, histomorphometric parameters of the femur, mechanical properties of the proximal tibial metaphysis, femoral diaphysis and femoral neck, and serum levels of bone turnover markers were examined.

Loratadine at 0.5 and 5 mg/kg did not significantly affect the skeletal system of young rats. At 50 mg/kg, loratadine decreased the femoral length, increased content of calcium and phosphorus in the bone mineral of the vertebra, and tended to improve mechanical properties of the tibial metaphysis.

Lawrence G. Raisz (2005)
Osteoporosis is a disorder in which loss of bone strength leads to fragility fractures. This review examines the fundamental pathogenetic mechanisms underlying this disorder, which include: (a) failure to achieve a skeleton of optimal strength during growth and development; (b) excessive bone resorption resulting in loss of bone mass and disruption of architecture; and (c) failure to replace lost bone due to defects in bone formation. Estrogen deficiency is known to play a critical role in the development of osteoporosis, while calcium and vitamin D deficiencies and secondary hyperparathyroidism also contribute. There are multiple mechanisms underlying the regulation of bone remodeling, and these involve not only the osteoblastic and osteoclastic cell lineages but also other marrow cells, in addition to the interaction of systemic hormones, local cytokines, growth factors, and transcription factors. Polymorphisms of a large number of genes have been associated with differences in bone mass and fragility. It is now possible to diagnose osteoporosis, assess fracture risk, and reduce that risk with antiresorptive or other available therapies. However, new and more effective approaches are likely to emerge from a better understanding of the regulators of bone cell function.

C Turner,  D B Burr (2015)
Although bone densitometry is often used as a surrogate to evaluate bone fragility, direct biomechanical testing of bone undoubtedly provides more information about mechanical integrity. Like any other specialized field, biomechanics contains its own techniques and vocabulary. This article serves as a guide to biomechanical principles and testing techniques for bone specimens.

Growth plate mechanics and mechanobiology. A survey of present understanding.

Isabelle Villemure,  Ian Stokes (2009)
The longitudinal growth of long bones occurs in growth plates where chondrocytes synthesize cartilage that is subsequently ossified. Altered growth and subsequent deformity resulting from abnormal mechanical loading is often referred to as mechanical modulation of bone growth. This phenomenon has key implications in the progression of infant and juvenile musculoskeletal deformities, such as adolescent idiopathic scoliosis, hyperkyphosis, genu varus/valgus and tibia vara/valga, as well as neuromuscular diseases. Clinical management of these deformities is often directed at modifying the mechanical environment of affected bones. However, there is limited quantitative and physiological understanding of how bone growth is regulated in response to mechanical loading. This review of published work addresses the state of knowledge concerning key questions about mechanisms underlying biomechanical modulation of bone growth. The longitudinal growth of bones is apparently controlled by modifying the numbers of growth plate chondrocytes in the proliferative zone, their rate of proliferation, the amount of chondrocytic hypertrophy and the controlled synthesis and degradation of matrix throughout the growth plate. These variables may be modulated to produce a change in growth rate in the presence of sustained or cyclic mechanical load. Tissue and cellular deformations involved in the transduction of mechanical stimuli depend on the growth plate tissue material properties that are highly anisotropic, time-dependent, and that differ in different zones of the growth plate and with developmental stages. There is little information about the effects of time-varying changes in volume, water content, osmolarity of matrix, etc. on differentiation, maturation and metabolic activity of chondrocytes. Also, the effects of shear forces and torsion on the growth plate are incompletely characterized. Future work on growth plate mechanobiology should distinguish between changes in the regulation of bone growth resulting from different processes, such as direct stimulation of the cell nuclei, physico-chemical stimuli, mechanical degradation of matrix or cellular components and possible alterations of local blood supply.

[1 ]Department of Pharmacology, School of Pharmacy with the Division of Laboratory Medicine in Sosnowiec, Medical University of Silesia , Katowice, Sosnowiec 41-200, Poland