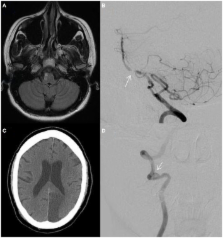 Marc I Chimowitz,  Michael Lynn,  Colin Derdeyn … (2011)
Atherosclerotic intracranial arterial stenosis is an important cause of stroke that is increasingly being treated with percutaneous transluminal angioplasty and stenting (PTAS) to prevent recurrent stroke. However, PTAS has not been compared with medical management in a randomized trial. We randomly assigned patients who had a recent transient ischemic attack or stroke attributed to stenosis of 70 to 99% of the diameter of a major intracranial artery to aggressive medical management alone or aggressive medical management plus PTAS with the use of the Wingspan stent system. The primary end point was stroke or death within 30 days after enrollment or after a revascularization procedure for the qualifying lesion during the follow-up period or stroke in the territory of the qualifying artery beyond 30 days. Enrollment was stopped after 451 patients underwent randomization, because the 30-day rate of stroke or death was 14.7% in the PTAS group (nonfatal stroke, 12.5%; fatal stroke, 2.2%) and 5.8% in the medical-management group (nonfatal stroke, 5.3%; non-stroke-related death, 0.4%) (P=0.002). Beyond 30 days, stroke in the same territory occurred in 13 patients in each group. Currently, the mean duration of follow-up, which is ongoing, is 11.9 months. The probability of the occurrence of a primary end-point event over time differed significantly between the two treatment groups (P=0.009), with 1-year rates of the primary end point of 20.0% in the PTAS group and 12.2% in the medical-management group. In patients with intracranial arterial stenosis, aggressive medical management was superior to PTAS with the use of the Wingspan stent system, both because the risk of early stroke after PTAS was high and because the risk of stroke with aggressive medical therapy alone was lower than expected. (Funded by the National Institute of Neurological Disorders and Stroke and others; SAMMPRIS ClinicalTrials.gov number, NCT00576693.).

T Metso,  Yvonn Kraemer,  J Metso … (2009)
To analyze trends in occurrence, risk factors, etiology, and neuroimaging features of ischemic stroke in young adults in a large cohort. We evaluated all 1008 consecutive ischemic stroke patients aged 15 to 49 admitted to Helsinki University Central Hospital, 1994 to 2007. Etiology was classified by Trial of Org 10172 in Acute Stroke Treatment criteria. Comparisons were done between groups stratified by gender and age. Estimated annual occurrence was 10.8/100,000 (range 8.4 to 13.0), increasing exponentially with aging. Of our 628 male and 380 female (ratio 1.7:1) patients, females were preponderant among those 44 clearly had more risk factors. Cardioembolism (20%) and cervicocerebral artery dissection (15%) were the most frequent etiologic subgroups. Proportions of large-artery atherosclerosis (8%) and small-vessel disease (14%) began to enlarge at age 35, whereas frequency of undetermined etiology (33%) decreased along aging. Posterior circulation infarcts were more common among patients <45 years of age. Left hemisphere infarcts were more frequent in general. There were 235 (23%) patients with multiple and 126 (13%) with silent infarcts, and 55 (5%) patients had leukoaraiosis. The frequency of ischemic stroke increases sharply at age 40. Etiology and risk factors start resembling those seen in the elderly in early midlife but causes defined in younger patients still are frequent in those aged 45 to 49. Subclinical infarcts were surprisingly common in the young.

This article was submitted to Neurocritical and Neurohospitalist Care, a section of the journal Frontiers in Neurology.