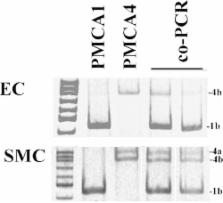 Vascular endothelial cells (EC) and smooth muscle cells (SMC) require a decrease in cytoplasmic Ca 2+ concentration after activation. This can be achieved by Ca 2+ sequestration by the sarco-/endoplasmic reticulum Ca 2+ pumps (SERCA) and Ca 2+ extrusion by plasma membrane Ca 2+ pumps (PMCA) and Na +–Ca 2+-exchangers (NCX). Since the two cell types differ in their structure and function, we compared the activities of PMCA, NCX and SERCA in pig coronary artery EC and SMC, the types of isoforms expressed using RT-PCR, and their protein abundance using Western blots. The activity of NCX is higher in EC than in SMC but those of PMCA and SERCA is lower. Consistently, the protein abundance for NCX protein is higher in EC than in SMC and those of PMCA and SERCA is lower. Based on RT-PCR experiments, the types of RNA present are as follows: EC for PMCA1 while SMC for PMCA4 and PMCA1; EC for SERCA2 and SERCA3 and SMC for SERCA2. Both EC and SMC express NCX1 (mainly NCX1.3). PMCA, SERCA and NCX differ in their affinities for Ca 2+ and regulation. Based on these observations and the literature, we conclude that the tightly regulated Ca 2+ removal systems in SMC are consistent with the cyclical control of contractility of the filaments and those in EC are consistent with Ca 2+ regulation of the endothelial nitric oxide synthase near the cell surface. The differences between EC and SMC should be considered in therapeutic interventions of cardiovascular diseases.

Physiology of the endothelium.

H.F. Galley,  N.R. WEBSTER (2004)
In the past, the endothelium was considered to be inert, described as a 'layer of nucleated cellophane', with only non-reactive barrier properties, such as presentation of a non-thrombogenic surface for blood flow and guarding against pro-inflammatory insults. However, it is now becoming clear that endothelial cells actively and reactively participate in haemostasis and immune and inflammatory reactions. They regulate vascular tone via production of nitric oxide, endothelin and prostaglandins and are involved in the manifestations of atherogenesis, autoimmune diseases and infectious processes. They produce and react to various cytokines and adhesion molecules and it is now clear that they can mount anti- and pro-inflammatory and protective responses depending on environmental conditions and are key immunoreactive cells. Endothelial dysfunction or activation also contributes to a variety of disease states.

Functional comparisons between isoforms of the sarcoplasmic or endoplasmic reticulum family of calcium pumps.

J Lytton,  W. D. Maclennan,  M Westlin … (1992)
ATP-dependent calcium pumps that reside in intracellular organelles are encoded by a family of structurally related enzymes, termed the sarcoplasmic or endoplasmic reticulum Ca(2+)-ATPases (SERCA), which each have a distinct pattern of tissue-specific and developmentally regulated expression. A COS-1 cell expression system was used to examine the biochemical properties of the isoforms: SERCA1 (fast-twitch skeletal muscle). SERCA2a (cardiac/slow-twitch skeletal muscle), SERCA2b (ubiquitous smooth- and non-muscle), and SERCA3 (non-muscle). Each isoform was expressed efficiently and appeared to be targeted to the endoplasmic reticulum. All isoforms displayed qualitatively similar enzymatic properties and were activated by calcium in a cooperative manner with a Hill coefficient of 2. The quantitative properties of SERCA1 and SERCA2a (the muscle isoforms) were identical in all respects. SERCA2b, however, appeared to have a lower turnover rate for both calcium transport and ATP hydrolysis. SERCA3 displayed a reduced apparent affinity for calcium, an increased apparent affinity for vanadate, and an altered pH dependence when compared with the other isoforms. These properties are consistent with an enzyme in which the equilibrium between the E1 and E2 conformations is shifted toward the E2 state.

C B Menice,  Kyle Morgan,  Netanel Horowitz … (1996)
Work performed with differentiated contractile smooth muscle tissue over the last two decades has made clear that covalent modification of myosin by phosphorylation of the 20-kDa myosin light chains is a significant mode of regulation of contractile activity in smooth muscle, particularly in regard to the generation of phasic contractions and the initial development of tonic contractions. This regulatory mechanism appears to be of unique importance in smooth muscle compared with striated muscle. It is equally clear, however, that there is an important role for protein kinase C in the regulation of smooth muscle tone maintenance, particularly in vascular smooth muscle. Several possible signal transduction cascades involving protein kinase C are outlined. Increasing evidence suggests a link between protein kinase C and actin-based regulatory mechanisms. This review places emphasis on relating up-to-date biochemical facts to the physiological realities of the smooth muscle cell.