Meditation on OM: Relevance from ancient texts and contemporary science 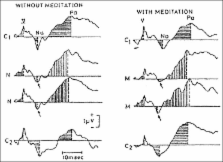 In Indian scriptures the sacred syllable Om is the primordial sound from which all other sounds and creation emerge which signifies the Supreme Power.

To explore the significance of the syllable OM from ancient texts and effects of OM meditation in contemporary science.

The descriptions of Om have been taken from four Upanisads ( Mundaka, Mandukya, Svetasvatara, and Katha), the Bhagvad Gita, and Patanjali’s Yoga Sutras.

Autonomic and respiratory studies suggest that there is a combination of mental alertness with physiological rest during the practice of Om meditation. Evoked potentials studies suggest a decrease in sensory transmission time at the level of the auditory association cortices, along with recruitment of more neurons at mesencephalic-diencephalic levels.

It is considered that a person who realizes Om, merges with the Absolute. Scientific studies on Om suggest that the mental repetition of Om results in physiological alertness, and increased sensitivity to sensory transmission.

R Nagarathna,  H. Nagendra,  S Telles (1995)
The autonomic and respiratory variables were studied in seven experienced meditators (with experience ranging from 5 to 20 years). Each subject was studied in two types of sessions--meditation (with a period of mental chanting of "OM") and control (with a period of non-targetted thinking). The meditators showed a statistically significant reduction in heart rate during meditation compared to the control period (paired 't' test). During both types of sessions there was a comparable increase in the cutaneous peripheral vascular resistance. Keeping in mind similar results of other authors, this was interpreted as a sign of increased mental alertness, even while being physiologically relaxed (as shown by the reduced heart rate).

The science of yoga

Autonomic changes while mentally repeating two syllables--one meaningful and the other neutral.

R Nagarathna,  H. Nagendra,  S Telles (1997)
Autonomic and respiratory variables were recorded in 12 volunteers in three types of sessions (1). Before, during and after a test period of mentally repeating a meaningful syllable 'OM' (MOM session) (2). A similar session except that the test period was spent mentally repeating a neutral work, 'one' (COM session) (3). A session with non-targeted thinking (NT session). The subjects were familiar with both syllables, and had been meditating on 'OM' for 20 days. During the test periods of both MOM and COM sessions the rate of respiration (RR) and heart rate (HR) decreased significantly [(two factor ANOVA (RR), paired t test (RR. HR)]. Compared to the pre period. Mental repetition of 'OM' (but not 'one') caused a significant decrease in skin resistance level (SRL) (paired t test). This was taken to mean that the subject recognized the significance of the syllable. No significant change occurred during NT sessions.