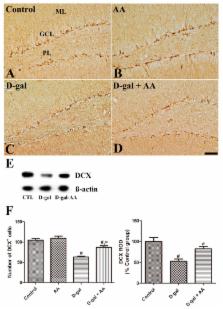 Evidence that brain-derived neurotrophic factor is required for basal neurogenesis and mediates, in part, the enhancement of neurogenesis by dietary restriction in the hippocampus of adult mice.

Mark Mattson,  Jaewon Lee,  Wenzhen Duan (2002)
To determine the role of brain-derived neurotrophic factor (BDNF) in the enhancement of hippocampal neurogenesis resulting from dietary restriction (DR), heterozygous BDNF knockout (BDNF +/-) mice and wild-type mice were maintained for 3 months on DR or ad libitum (AL) diets. Mice were then injected with bromodeoxyuridine (BrdU) and killed either 1 day or 4 weeks later. Levels of BDNF protein in neurons throughout the hippocampus were decreased in BDNF +/- mice, but were increased by DR in wild-type mice and to a lesser amount in BDNF +/- mice. One day after BrdU injection the number of BrdU-labeled cells in the dentate gyrus of the hippocampus was significantly decreased in BDNF +/- mice maintained on the AL diet, suggesting that BDNF signaling is important for proliferation of neural stem cells. DR had no effect on the proliferation of neural stem cells in wild-type or BDNF +/- mice. Four weeks after BrdU injection, numbers of surviving labeled cells were decreased in BDNF +/- mice maintained on either AL or DR diets. DR significantly improved survival of newly generated cells in wild-type mice, and also improved their survival in BDNF +/- mice, albeit to a lesser extent. The majority of BrdU-labeled cells in the dentate gyrus exhibited a neuronal phenotype at the 4-week time point. The reduced neurogenesis in BDNF +/- mice was associated with a significant reduction in the volume of the dentate gyrus. These findings suggest that BDNF plays an important role in the regulation of the basal level of neurogenesis in dentate gyrus of adult mice, and that by promoting the survival of newly generated neurons BDNF contributes to the enhancement of neurogenesis induced by DR.

Lei Zhao,  Rui An,  Yang Yang … (2015)
Sepsis is a systemic inflammatory response to infection that causes severe neurological complications. Previous studies have suggested that melatonin is protective during sepsis. Additionally, silent information regulator 1 (SIRT1) was reported to be beneficial in sepsis. However, the role of SIRT1 signaling in the protective effect of melatonin against septic encephalopathy remains unclear. This study aimed to investigate the role of SIRT1 in the protective effect of melatonin. EX527, a SIRT1 inhibitor, was used to reveal the role of SIRT1 in melatonin's action. Cecal ligation and puncture or sham operation was performed in male C57BL/6J mice. Melatonin was administrated intraperitoneally (30 mg/kg). The survival rate of mice was recorded for the 7-day period following the sham or CLP operation. The blood-brain barrier (BBB) integrity, brain water content, levels of inflammatory cytokines (TNF-α, IL-1β, and HMGB1), and the level of oxidative stress (superoxide dismutase (SOD), catalase (CAT), and malondialdehyde (MDA)) and apoptosis were assessed. The expression of SIRT1, Ac-FoxO1, Ac-p53, Ac-NF-κB, Bcl-2, and Bax was detected by Western blot. The results suggested that melatonin improved survival rate, attenuated brain edema and neuronal apoptosis, and preserved BBB integrity. Melatonin decreased the production of TNF-α, IL-1β, and HMGB1. Melatonin increased the activity of SOD and CAT and decreased the MDA production. Additionally, melatonin upregulated the expression of SIRT1 and Bcl-2 and downregulated the expression of Ac-FoxO1, Ac-p53, Ac-NF-κB, and Bax. However, the protective effects of melatonin were abolished by EX527. In conclusion, our results demonstrate that melatonin attenuates sepsis-induced brain injury via SIRT1 signaling activation.