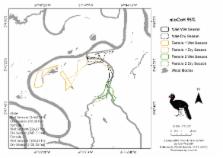 Patterns of habitat selection are influenced by local productivity, resource availability, and predation risk. Species have taken millions of years to hone the macro- and micro-habitats they occupy, but these may now overlap with contemporary human threats within natural species ranges. Wattled Curassow ( Crax globulosa), an endemic galliform species of the western Amazon, is threatened by both hunting and habitat loss, and is restricted to white-water floodplain forests of major Amazonian rivers. In this study conducted along the Juruá River, Amazonas, Brazil, we quantified the ranging ecology and fine-scale patterns of habitat selection of the species. We estimated the home range size of C. globulosa using conventional VHF telemetry. To estimate patterns of habitat selection, we used geo-locations of day ranges to examine the extent and intensity of use across the floodplain, which were then compared to a high-resolution flood map of the study area. We captured two females and one male, which we monitored for 13 months between September 2014 and September 2015. Average home range size was 283 ha, based on the 95% aLoCoH estimator. Wattled Curassows selected areas of prolonged flood pulses (six to eight months/year) and had a consistent tendency to be near open water, usually in close proximity to river banks and lakes, especially during the dry season. Amazonian floodplains are densely settled, and the small portions of floodplain habitat used by Wattled Curassows are both the most accessible to hunters and most vulnerable to deforestation. As a result, the geographic and ecological distribution of Wattled Curassows places them at much higher extinction risk at multiple spatial scales, highlighting the need to consider habitat preferences within their conservation strategy.

A Technique for Analysis of Utilization-Availability Data