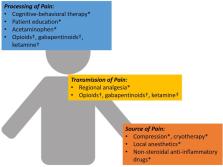 Pain terms: a list with definitions and notes on usage. Recommended by the IASP Subcommittee on Taxonomy.

Pain catastrophizing as a risk factor for chronic pain after total knee arthroplasty: a systematic review