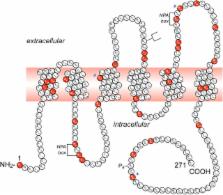 It is clinically useful to distinguish between two types of hereditary nephrogenic diabetes insipidus (NDI): a ‘pure’ type characterized by loss of water only and a complex type characterized by loss of water and ions. Patients with congenital NDI bearing mutations in the vasopressin 2 receptor gene, AVPR2, or in the aquaporin-2 gene, AQP2, have a pure NDI phenotype with loss of water but normal conservation of sodium, potassium, chloride and calcium. Patients with hereditary hypokalemic salt-losing tubulopathies have a complex phenotype with loss of water and ions. They have polyhydramnios, hypercalciuria and hypo- or isosthenuria and were found to bear KCNJ1 (ROMK) and SLC12A1 (NKCC2) mutations. Patients with polyhydramnios, profound polyuria, hyponatremia, hypochloremia, metabolic alkalosis and sensorineural deafness were found to bear BSND mutations. These clinical phenotypes demonstrate the critical importance of the proteins ROMK, NKCC2 and Barttin to transfer NaCl in the medullary interstitium and thereby to generate, together with urea, a hypertonic milieu. This editorial describes two new developments: (i) the genomic information provided by the sequencing of the AQP2 gene is key to the routine care of these patients, and, as in other genetic diseases, reduces health costs and provides psychological benefits to patients and families and (ii) the expression of AQP2 mutants in Xenopus oocytes and in polarized renal tubular cells recapitulates the clinical phenotypes and reveals a continuum from severe loss of function with urinary osmolalities <150 mOsm/kg H2O to milder defects with urine osmolalities >200 mOsm/kg H2O.

Charting a course for genomic medicine from base pairs to bedside.

D. Green,  ,  S Guyer (2011)
There has been much progress in genomics in the ten years since a draft sequence of the human genome was published. Opportunities for understanding health and disease are now unprecedented, as advances in genomics are harnessed to obtain robust foundational knowledge about the structure and function of the human genome and about the genetic contributions to human health and disease. Here we articulate a 2011 vision for the future of genomics research and describe the path towards an era of genomic medicine.

Aquaporins in the kidney: from molecules to medicine.

Kee Kwon,  Søren Nielsen,  D Marples … (2001)
The discovery of aquaporin-1 (AQP1) answered the long-standing biophysical question of how water specifically crosses biological membranes. In the kidney, at least seven aquaporins are expressed at distinct sites. AQP1 is extremely abundant in the proximal tubule and descending thin limb and is essential for urinary concentration. AQP2 is exclusively expressed in the principal cells of the connecting tubule and collecting duct and is the predominant vasopressin-regulated water channel. AQP3 and AQP4 are both present in the basolateral plasma membrane of collecting duct principal cells and represent exit pathways for water reabsorbed apically via AQP2. Studies in patients and transgenic mice have demonstrated that both AQP2 and AQP3 are essential for urinary concentration. Three additional aquaporins are present in the kidney. AQP6 is present in intracellular vesicles in collecting duct intercalated cells, and AQP8 is present intracellularly at low abundance in proximal tubules and collecting duct principal cells, but the physiological function of these two channels remains undefined. AQP7 is abundant in the brush border of proximal tubule cells and is likely to be involved in proximal tubule water reabsorption. Body water balance is tightly regulated by vasopressin, and multiple studies now have underscored the essential roles of AQP2 in this. Vasopressin regulates acutely the water permeability of the kidney collecting duct by trafficking of AQP2 from intracellular vesicles to the apical plasma membrane. The long-term adaptational changes in body water balance are controlled in part by regulated changes in AQP2 and AQP3 expression levels. Lack of functional AQP2 is seen in primary forms of diabetes insipidus, and reduced expression and targeting are seen in several diseases associated with urinary concentrating defects such as acquired nephrogenic diabetes insipidus, postobstructive polyuria, as well as acute and chronic renal failure. In contrast, in conditions with water retention such as severe congestive heart failure, pregnancy, and syndrome of inappropriate antidiuretic hormone secretion, both AQP2 expression levels and apical plasma membrane targetting are increased, suggesting a role for AQP2 in the development of water retention. Continued analysis of the aquaporins is providing detailed molecular insight into the fundamental physiology and pathophysiology of water balance and water balance disorders.

Control of the selectivity of the aquaporin water channel family by global orientational tuning.

Larry J Miercke,  Kirsten Jensen,  Klaus Schulten … (2002)
Aquaporins are transmembrane channels found in cell membranes of all life forms. We examine their apparently paradoxical property, facilitation of efficient permeation of water while excluding protons, which is of critical importance to preserving the electrochemical potential across the cell membrane. We have determined the structure of the Escherichia coli aquaglyceroporin GlpF with bound water, in native (2.7 angstroms) and in W48F/F200T mutant (2.1 angstroms) forms, and carried out 12-nanosecond molecular dynamics simulations that define the spatial and temporal probability distribution and orientation of a single file of seven to nine water molecules inside the channel. Two conserved asparagines force a central water molecule to serve strictly as a hydrogen bond donor to its neighboring water molecules. Assisted by the electrostatic potential generated by two half-membrane spanning loops, this dictates opposite orientations of water molecules in the two halves of the channel, and thus prevents the formation of a "proton wire," while permitting rapid water diffusion. Both simulations and observations revealed a more regular distribution of channel water and an increased water permeability for the W48F/F200T mutant.