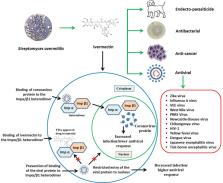 Moushimi Amaya,  Aarthi Narayanan,  Kylene Kehn-Hall … (2013)
Targeting host responses to invading viruses has been the focus of recent antiviral research. Venezuelan Equine Encephalitis Virus (VEEV) is able to modulate host transcription and block nuclear trafficking at least partially due to its capsid protein forming a complex with the host proteins importin α/β1 and CRM1. We hypothesized that disrupting the interaction of capsid with importin α/β1 or the interaction of capsid with CRM1 would alter capsid localization, thereby lowering viral titers in vitro. siRNA mediated knockdown of importin α, importin β1, and CRM1 altered capsid localization, confirming their role in modulating capsid trafficking. Mifepristone and ivermectin, inhibitors of importin α/β-mediated import, were able to reduce nuclear-associated capsid, while leptomycin B, a potent CRM1 inhibitor, confined capsid to the nucleus. In addition to altering the level and distribution of capsid, the three inhibitors were able to reduce viral titers in a relevant mammalian cell line with varying degrees of efficacy. The inhibitors were also able to reduce the cytopathic effects associated with VEEV infection, hinting that nuclear import inhibitors may be protecting cells from apoptosis in addition to disrupting the function of an essential viral protein. Our results confirm that VEEV uses host importins and exportins during part of its life cycle. Further, it suggests that temporarily targeting host proteins that are hijacked for use by viruses is a viable antiviral therapy. Copyright © 2013 Elsevier B.V. All rights reserved.

Veronika Götz,  Linda Magar,  Dominik Dornfeld … (2016)
To establish a new lineage in the human population, avian influenza A viruses (AIV) must overcome the intracellular restriction factor MxA. Partial escape from MxA restriction can be achieved when the viral nucleoprotein (NP) acquires the critical human-adaptive amino acid residues 100I/V, 283P, and 313Y. Here, we show that introduction of these three residues into the NP of an avian H5N1 virus renders it genetically unstable, resulting in viruses harboring additional single mutations, including G16D. These substitutions restored genetic stability yet again yielded viruses with varying degrees of attenuation in mammalian and avian cells. Additionally, most of the mutant viruses lost the capacity to escape MxA restriction, with the exception of the G16D virus. We show that MxA escape is linked to attenuation by demonstrating that the three substitutions promoting MxA escape disturbed intracellular trafficking of incoming viral ribonucleoprotein complexes (vRNPs), thereby resulting in impaired nuclear import, and that the additional acquired mutations only partially compensate for this import block. We conclude that for adaptation to the human host, AIV must not only overcome MxA restriction but also an associated block in nuclear vRNP import. This inherent difficulty may partially explain the frequent failure of AIV to become pandemic.

Ivermectin, ‘Wonder drug’ from Japan: the human use perspective

Andy CRUMP,  Satoshi Ōmura (2011)
Discovered in the late-1970s, the pioneering drug ivermectin, a dihydro derivative of avermectin—originating solely from a single microorganism isolated at the Kitasato Intitute, Tokyo, Japan from Japanese soil—has had an immeasurably beneficial impact in improving the lives and welfare of billions of people throughout the world. Originally introduced as a veterinary drug, it kills a wide range of internal and external parasites in commercial livestock and companion animals. It was quickly discovered to be ideal in combating two of the world’s most devastating and disfiguring diseases which have plagued the world’s poor throughout the tropics for centuries. It is now being used free-of-charge as the sole tool in campaigns to eliminate both diseases globally. It has also been used to successfully overcome several other human diseases and new uses for it are continually being found. This paper looks in depth at the events surrounding ivermectin’s passage from being a huge success in Animal Health into its widespread use in humans, a development which has led many to describe it as a “wonder” drug.