The effect of obesity on patients with mild chronic obstructive pulmonary disease: results from KNHANES 2010 to 2012 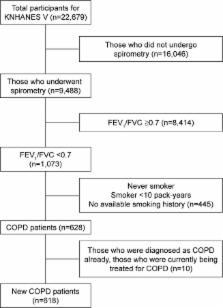 A low body mass index has been associated with high mortalities in patients with chronic obstructive pulmonary disease (COPD), and studies reveal that obesity aggravates the clinical effects of COPD. We investigated the impact of obesity on patients newly identified with COPD.

This population-based, cross-sectional study, used data from the Korea National Health and Nutrition Examination Survey (KNHANES) conducted from 2010 to 2012. Through analyses of data from this survey, we compared concurrent comorbid diseases, symptoms, and lung functions between an obese and nonobese group of patients with COPD.

Among subjects newly identified with mild COPD, participants in the obese group had more comorbid conditions and showed a lower FVC compared with subjects in the nonobese group, even after adjustment of covariates. These findings show that a combination of obesity and COPD may be a severe phenotype; therefore, early attention should be paid to obesity for the management of COPD patients.

Report of a WHO consultation,  WHO,  Organization World Health … (2000)

2013 ESH/ESC Guidelines for the Management of Arterial Hypertension.

Yeon-Kyeng Lee,  Hae-Sung Nam,  Ling-Hsiang Chuang … (2009)
This study establishes the South Korean population-based preference weights for EQ-5D based on values elicited from a representative national sample using the time trade-off (TTO) method. The data for this paper came from a South Korean EQ-5D valuation study where 1307 representative respondents were invited to participate and a total of 101 health states defined by the EQ-5D descriptive system were directly valued. Both aggregate and individual level modeling were conducted to generate values for all 243 health states defined by EQ-5D. Various regression techniques and model specifications were also examined in order to produce the best fit model. Final model selection was based on minimizing the difference between the observed and estimated value for each health state. The N3 model yielded the best fit for the observed TTO value at the aggregate level. It had a mean absolute error of 0.029 and only 15 predictions out of 101 had errors exceeding 0.05 in absolute magnitude. The study successfully establishes South Korean population-based preference weights for the EQ-5D. The value set derived here is based on a representative population sample, limiting the interpolation space and possessing better model performance. Thus, this EQ-5D value set should be given preference for use with the South Korean population.