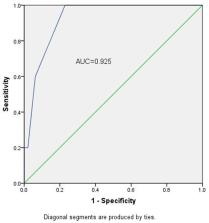 To determine the risk factors for pulmonary complications after minimally invasive surgery in elderly patients with vertebral compression fractures (VCFs).

A total of 233 elderly patients (age ≥ 65 years) with VCFs, who underwent percutaneous vertebroplasty (PVP) or percutaneous kyphoplasty (PKP) surgery at Hebei General Hospital from January 2011 to December 2016, were retrospectively analyzed. Risk factors and the effects of the model were determined by univariate logistic regression analyses and the receiver operating characteristic (ROC) curve, respectively. A risk assessment scale was established based on the risk factors, as well as physiological and surgical scores for mortality and morbidity. The risk assessment scale prospectively evaluated risk factors of pulmonary complications after minimally invasive surgery for elderly patients with VCFs from January to June 2017.

Epidemiology of vertebral fractures in women.

David Fribourg,  Parveen Sra,  Rick B Delamarter … (2004)
A retrospective review of charts and radiographs of all consecutive patients who underwent kyphoplasty at the authors' center from the initial procedure in September 2000 to the end of the collection period in July 2002. The best available natural history data would suggest that after experiencing an osteoporotic vertebral compression fracture, patients have a 19% incidence of subsequent fracture in the following year when no surgical intervention is performed. When kyphoplasty is performed, there are conflicting data regarding the incidence of subsequent fracture, ranging anywhere from 3 to 29%. These fractures occur at adjacent levels between 30 and 90% of the time, with no clear explanation for the wide variation in the results of three different studies. There are biomechanical data to suggest that injection of cement does increase the stiffness of the treated vertebra and that this increases strain on adjacent vertebrae, especially in forward bending. A database was created containing patient age, gender, height, weight, medication history, comorbidities, fracture levels, and pain level before and after surgery. Subsequent fractures were confirmed with radiographs and MRI. Statistical analysis was performed. Thirty-eight patients (10 men and 28 women) were treated for 47 levels initially. L1 and L2 were the most common level of fracture managed initially. The gender, smoking and medication history, location of fracture, and number of fracture levels of the patients did not correlate with the risk of subsequent fracture. Over the follow-up period (average, 8 months), 10 patients sustained 17 subsequent fractures. Eight patients sustained fractures in the first 2 months after the index procedure, all with at least one fracture at an adjacent level. Of the 17 subsequent fractures, there were nine at the adjacent-above levels, four at adjacent-below levels, and four at remote levels. The remote fractures occurred at significantly greater time intervals after the index procedure (P < 0.001). This study demonstrated a higher rate of subsequent fracture after kyphoplasty compared with natural history data for untreated fractures. Most of these occurred at an adjacent level within 2 months of the index procedure. After this 2-month period, there were only occasional subsequent fractures, which occurred at remote levels. This confirms biomechanical studies showing that cement augmentation places additional stress on adjacent levels. Patients with an increase in back pain after kyphoplasty should be evaluated carefully for subsequent adjacent fractures, especially during the first 2 months after the index procedure.

Peter Mancuso,  Nathan LeBrasseur (2010)
The prevalence of obesity has increased dramatically worldwide, predisposing individuals to an increased risk of morbidity and mortality due to cardiovascular disease and type 2 diabetes. Less recognized is the fact that obesity may play a significant role in the pathogenesis of pulmonary diseases through mechanisms that may involve proinflammatory mediators produced in adipose tissue that contribute to a low-grade state of systemic inflammation. In animal models, inflammatory responses in the lung have been shown to influence the production of the adipocytokines, leptin and adiponectin, cytokines, acute phase proteins, and other mediators produced by adipose tissue that may participate in immune responses of the lung. An increased adipose tissue mass may also influence susceptibility to pulmonary infections, enhance pulmonary inflammation associated with environmental exposures, and exacerbate airway obstruction in preexisting lung disease. An increased understanding of the mechanisms by which obesity influences pulmonary inflammation may facilitate the development of novel therapeutic interventions for the treatment of lung disease.