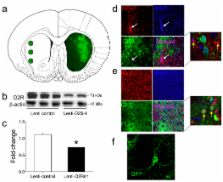 We found that development of obesity was coupled with the emergence of a progressively worsening brain reward deficit. Similar changes in reward homeostasis induced by cocaine or heroin is considered a critical trigger in the transition from casual to compulsive drug-taking. Accordingly, we detected compulsive-like feeding behavior in obese but not lean rats, measured as palatable food consumption that was resistant to disruption by an aversive conditioned stimulus. Striatal dopamine D2 receptors (D2R) were downregulated in obese rats, similar to previous reports in human drug addicts. Moreover, lentivirus-mediated knockdown of striatal D2R rapidly accelerated the development of addiction-like reward deficits and the onset of compulsive-like food seeking in rats with extended access to palatable high-fat food. These data demonstrate that overconsumption of palatable food triggers addiction-like neuroadaptive responses in brain reward circuitries and drives the development of compulsive eating. Common hedonic mechanisms may therefore underlie obesity and drug addiction.

Catherine R. Sears,  D Georgescu,  Richard Trinko … (2006)
The leptin hormone is critical for normal food intake and metabolism. While leptin receptor (Lepr) function has been well studied in the hypothalamus, the functional relevance of Lepr expression in the ventral tegmental area (VTA) has not been investigated. The VTA contains dopamine neurons that are important in modulating motivated behavior, addiction, and reward. Here, we show that VTA dopamine neurons express Lepr mRNA and respond to leptin with activation of an intracellular JAK-STAT pathway and a reduction in firing rate. Direct administration of leptin to the VTA caused decreased food intake while long-term RNAi-mediated knockdown of Lepr in the VTA led to increased food intake, locomotor activity, and sensitivity to highly palatable food. These data support a critical role for VTA Lepr in regulating feeding behavior and provide functional evidence for direct action of a peripheral metabolic signal on VTA dopamine neurons.

How can drug addiction help us understand obesity?