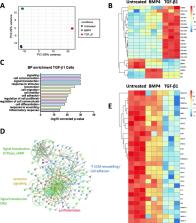 Excessive TGF-β signalling has been shown to underlie pulmonary hypertension (PAH). Human pulmonary artery smooth muscle cells (HPASMCs) can release extracellular vesicles (EVs) but their contents and significance have not yet been studied. Here, we aimed to analyse the contents and biological relevance of HPASMC-EVs and their transport to human pulmonary arterial endothelial cells (HPAECs), as well as the potential alteration of these under pathological conditions.

We used low-input RNA-Seq to analyse the RNA cargoes sorted into released HPASMC-EVs under basal conditions. We additionally analysed the effects of excessive TGF-β signalling, using TGF-β1 and BMP4, in the transcriptome of HPASMCs and their EVs. We then, for the first time, optimised Cre-loxP technology for its use with primary cells in vitro, directly visualising HPASMC-to-HPAEC communication and protein markers on cells taking up EVs. Furthermore we could analyse alteration of this transport with excessive TGF-β signalling, as well as by other cytokines involved in PAH: IL-1β, TNF-α and VEGFA.

We were able to detect transcripts from 2417 genes in HPASMC-EVs. Surprisingly, among the 759 enriched in HPASMC-EVs compared to their donor cells, we found Zeb1 and 2 TGF-β superfamily ligands, GDF11 and TGF-β3. Moreover, we identified 90 genes differentially expressed in EVs from cells treated with TGF-β1 compared to EVs in basal conditions, including a subset involved in actin and ECM remodelling, among which were bHLHE40 and palladin. Finally, using Cre-loxP technology we showed cell-to-cell transfer and translation of HPASMC-EV Cre mRNA from HPASMC to HPAECs, effectively evidencing communication via EVs. Furthermore, we found increased number of smooth-muscle actin positive cells on HPAECs that took up HPASMC-EVs. The uptake and translation of mRNA was also higher in activated HPAECs, when stimulated with TGF-β1 or IL-1β.

HPASMC-EVs are enriched in RNA transcripts that encode genes that could contribute to vascular remodelling and EndoMT during development and PAH, and TGF-β1 up-regulates some that could enhance this effects. These EVs are functionally transported, increasingly taken up by activated HPAECs and contribute to EndoMT, suggesting a potential effect of HPASMC-EVs in TGF-β signalling and other related processes during PAH development.

Anoek Zomer,  Carrie Maynard,  Frederik Johannes Verweij … (2015)
Summary Most cancer cells release heterogeneous populations of extracellular vesicles (EVs) containing proteins, lipids, and nucleic acids. In vitro experiments showed that EV uptake can lead to transfer of functional mRNA and altered cellular behavior. However, similar in vivo experiments remain challenging because cells that take up EVs cannot be discriminated from non-EV-receiving cells. Here, we used the Cre-LoxP system to directly identify tumor cells that take up EVs in vivo. We show that EVs released by malignant tumor cells are taken up by less malignant tumor cells located within the same and within distant tumors and that these EVs carry mRNAs involved in migration and metastasis. By intravital imaging, we show that the less malignant tumor cells that take up EVs display enhanced migratory behavior and metastatic capacity. We postulate that tumor cells locally and systemically share molecules carried by EVs in vivo and that this affects cellular behavior.

Nicholas Morrell,  Serge Adnot,  Stephen Archer … (2009)
Pulmonary arterial hypertension (PAH) is caused by functional and structural changes in the pulmonary vasculature, leading to increased pulmonary vascular resistance. The process of pulmonary vascular remodeling is accompanied by endothelial dysfunction, activation of fibroblasts and smooth muscle cells, crosstalk between cells within the vascular wall, and recruitment of circulating progenitor cells. Recent findings have reestablished the role of chronic vasoconstriction in the remodeling process. Although the pathology of PAH in the lung is well known, this article is concerned with the cellular and molecular processes involved. In particular, we focus on the role of the Rho family guanosine triphosphatases in endothelial function and vasoconstriction. The crosstalk between endothelium and vascular smooth muscle is explored in the context of mutations in the bone morphogenetic protein type II receptor, alterations in angiopoietin-1/TIE2 signaling, and the serotonin pathway. We also review the role of voltage-gated K(+) channels and transient receptor potential channels in the regulation of cytosolic [Ca(2+)] and [K(+)], vasoconstriction, proliferation, and cell survival. We highlight the importance of the extracellular matrix as an active regulator of cell behavior and phenotype and evaluate the contribution of the glycoprotein tenascin-c as a key mediator of smooth muscle cell growth and survival. Finally, we discuss the origins of a cell type critical to the process of pulmonary vascular remodeling, the myofibroblast, and review the evidence supporting a contribution for the involvement of endothelial-mesenchymal transition and recruitment of circulating mesenchymal progenitor cells.

Rong Xu,  David W. Greening,  Hong-Jian Zhu … (2016)
Two broad categories of extracellular vesicles (EVs), exosomes and shed microvesicles (sMVs), which differ in size distribution as well as protein and RNA profiles, have been described. EVs are known to play key roles in cell-cell communication, acting proximally as well as systemically. This Review discusses the nature of EV subtypes, strategies for isolating EVs from both cell-culture media and body fluids, and procedures for quantifying EVs. We also discuss proteins selectively enriched in exosomes and sMVs that have the potential for use as markers to discriminate between EV subtypes, as well as various applications of EVs in clinical diagnosis.