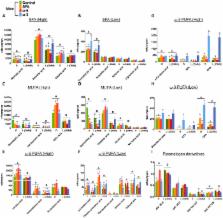 High-fat diet-induced obesity is a major risk factor for osteoarthritis (OA) and diminished wound healing. The objective of this study was to determine the associations among serum and synovial fluid lipid levels with OA, synovitis, adipokine levels, and wound healing in a pre-clinical obese mouse model of OA. Male C57BL/6 J mice were fed either a low-fat (10% kcal) or one of three high-fat (HF, 60% kcal) diets rich in saturated fatty acids (SFAs), ω-6 or ω-3 polyunsaturated FAs (PUFAs). OA was induced by destabilization of the medial meniscus. Mice also received an ear punch for evaluating wound healing. Serum and synovial fluid were collected for lipidomic and adipokine analyses. We demonstrated that the serum levels of ω-3 PUFAs were negatively correlated with OA and wound size, but positively correlated with adiponectin levels. In contrast, most ω-6 PUFAs exhibited positive correlations with OA, impaired healing, and inflammatory adipokines. Interestingly, levels of pentadecylic acid (C15:0, an odd-chain SFA) and palmitoleic acid were inversely correlated with joint degradation. This study extends our understanding of the links of FAs with OA, synovitis and wound healing, and reports newly identified serum and synovial fluid FAs as predictive biomarkers of OA in obesity.

F Berenbaum (2012)
Osteoarthritis (OA) has long been considered a "wear and tear" disease leading to loss of cartilage. OA used to be considered the sole consequence of any process leading to increased pressure on one particular joint or fragility of cartilage matrix. Progress in molecular biology in the 1990s has profoundly modified this paradigm. The discovery that many soluble mediators such as cytokines or prostaglandins can increase the production of matrix metalloproteinases by chondrocytes led to the first steps of an "inflammatory" theory. However, it took a decade before synovitis was accepted as a critical feature of OA, and some studies are now opening the way to consider the condition a driver of the OA process. Recent experimental data have shown that subchondral bone may have a substantial role in the OA process, as a mechanical damper, as well as a source of inflammatory mediators implicated in the OA pain process and in the degradation of the deep layer of cartilage. Thus, initially considered cartilage driven, OA is a much more complex disease with inflammatory mediators released by cartilage, bone and synovium. Low-grade inflammation induced by the metabolic syndrome, innate immunity and inflammaging are some of the more recent arguments in favor of the inflammatory theory of OA and highlighted in this review. Copyright © 2012 Osteoarthritis Research Society International. Published by Elsevier Ltd. All rights reserved.

Philip C. Calder (2012)
(n-3) PUFA are a family of biologically active fatty acids. The simplest member of this family, α-linolenic acid, can be converted to the more biologically active very long-chain (n-3) PUFA EPA and DHA; this process occurs by a series of desaturation and elongation reactions, with stearidonic acid being an intermediate in the pathway. Biological activity of α-linolenic and stearidonic acids most likely relates to their conversion to EPA. The very long-chain (n-3) PUFA have a range of physiological roles that relate to optimal cell membrane structure and optimal cell function and responses. Thus, (n-3) PUFA play a key role in preventing, and perhaps treating, many conditions of poor health and well-being. The multiple actions of (n-3) PUFA appear to involve multiple mechanisms that connect the cell membrane, the cytosol, and the nucleus. For some actions, (n-3) PUFA appear to act via receptors or sensors, so regulating signaling processes that influence patterns of gene expression. Some effects of (n-3) PUFA seem to involve changes in cell membrane fatty acid composition. Changing membrane composition can in turn affect membrane order, formation of lipid rafts, intracellular signaling processes, gene expression, and the production of both lipid and peptide mediators. Under typical Western dietary conditions, human cells tend to have a fairly high content of the (n-6) fatty acid arachidonic acid. Increased oral intake of EPA and DHA modifies the content of arachidonic acid as well as of EPA and DHA. Arachidonic acid is the substrate for eicosanoids involved in physiology and pathophysiology. The eicosanoids produced from EPA frequently have properties that are different from those that are produced from arachidonic acid. EPA and DHA are also substrates for production of resolvins and protectins, which seem to be biologically extremely potent. Increasing the contents of EPA and DHA in membranes modifies the pattern of production of these different lipid mediators.

Projections of US prevalence of arthritis and associated activity limitations.

Jennifer M Hootman,  Charles G Helmick (2005)
To update the projected prevalence of self-reported, doctor-diagnosed arthritis and arthritis-attributable activity limitations among US adults ages 18 years and older from 2005 through 2030. Baseline age- and sex-specific prevalence rates of arthritis and activity limitation, using the latest surveillance case definitions, were estimated from the 2003 National Health Interview Survey, which is an annual, cross-sectional, population-based health interview survey of approximately 31,000 adults. These estimates were used to calculate projected arthritis prevalence and activity limitations for 2005-2030 using future population projections obtained from the US Census Bureau. The prevalence of self-reported, doctor-diagnosed arthritis is projected to increase from 47.8 million in 2005 to nearly 67 million by 2030 (25% of the adult population). By 2030, 25 million (9.3% of the adult population) are projected to report arthritis-attributable activity limitations. In 2030, >50% of arthritis cases will be among adults older than age 65 years. However, working-age adults (45-64 years) will account for almost one-third of cases. By 2030, the number of US adults with arthritis and its associated activity limitation is expected to increase substantially, resulting in a large impact on individuals, the health care system, and society in general. The growing epidemic of obesity may also significantly contribute to the future burden of arthritis. Improving access and availability of current clinical and public health interventions aimed at improving quality of life among persons with arthritis through lifestyle changes and disease self-management may help lessen the long-term impact.