Insecticide resistance in malaria-transmitting mosquitoes in Zimbabwe: a review 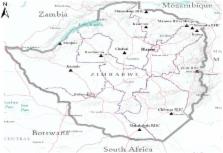 Malaria is a global public health problem, with about 3.2 billion people at risk of infection. The populations at risk mainly reside in Africa, Asia and America, with African populations accounting for the largest burden of the disease. In 2013, close to 198 million malaria cases were reported, leading to 584,000 deaths. Much (90 %) of the mortality rates were recorded from the World Health Organization (WHO) database in the African region and 78 % of these occurred in children under the age of five. In Zimbabwe, approximately half of the population is at risk of infection with malaria.

Insecticide residual spraying (IRS) has been documented as an effective way to control malaria and has been adopted globally by the WHO and national governments. However, both insecticide resistance and climate change threaten to reverse the progress made by IRS in malaria control. Resistance has been reported in all four classes of insecticides approved by the WHO for vector control intervention. Variability of environmental temperature is suspected to complicate the situation through alteration in the genetic structure, and enzyme and protein profiles of mosquitoes. In Zimbabwe, little research has been done on the interaction between climate change, temperature variability and insecticide resistance in malarial mosquitoes over time. Such information is important for informing policies on insecticide selection for IRS.

We reviewed literature on insecticide sensitivity among malarial mosquitoes in Zimbabwe from 1972 to 2014. International peer-reviewed articles on insecticide sensitivity in Zimbabwe, published in English in this time period, were searched using MEDLINE® (PubMed), Google Scholar, Google and grey literature. Eight publications were eligible for the present study, with one of the articles being a review paper. Six articles covered insecticide resistance, while the other two articles, published in 2000, were about the absence of resistance. Contradicting resistance results were reported in 2014.

Pyrethroid resistance in African anopheline mosquitoes: what are the implications for malaria control?

Raphael N’Guessan,  Hilary Ranson,  Nicolas Moiroux … (2011)
The use of pyrethroid insecticides in malaria vector control has increased dramatically in the past decade through the scale up of insecticide treated net distribution programmes and indoor residual spraying campaigns. Inevitably, the major malaria vectors have developed resistance to these insecticides and the resistance alleles are spreading at an exceptionally rapid rate throughout Africa. Although substantial progress has been made on understanding the causes of pyrethroid resistance, remarkably few studies have focused on the epidemiological impact of resistance on current malaria control activities. As we move into the malaria eradication era, it is vital that the implications of insecticide resistance are understood and strategies to mitigate these effects are implemented. Copyright © 2010 Elsevier Ltd. All rights reserved.

Peter W. R. Woodruff,  Simon Hales,  Anthony J McMichael (2006)
There is near unanimous scientific consensus that greenhouse gas emissions generated by human activity will change Earth's climate. The recent (globally averaged) warming by 0.5 degrees C is partly attributable to such anthropogenic emissions. Climate change will affect human health in many ways-mostly adversely. Here, we summarise the epidemiological evidence of how climate variations and trends affect various health outcomes. We assess the little evidence there is that recent global warming has already affected some health outcomes. We review the published estimates of future health effects of climate change over coming decades. Research so far has mostly focused on thermal stress, extreme weather events, and infectious diseases, with some attention to estimates of future regional food yields and hunger prevalence. An emerging broader approach addresses a wider spectrum of health risks due to the social, demographic, and economic disruptions of climate change. Evidence and anticipation of adverse health effects will strengthen the case for pre-emptive policies, and will also guide priorities for planned adaptive strategies.

Janet Hemingway,  Hilary Ranson (2000)
Insecticide resistance is an increasing problem in many insect vectors of disease. Our knowledge of the basic mechanisms underlying resistance to commonly used insecticides is well established. Molecular techniques have recently allowed us to start and dissect most of these mechanisms at the DNA level. The next major challenge will be to use this molecular understanding of resistance to develop novel strategies with which we can truly manage resistance. State-of-the-art information on resistance in insect vectors of disease is reviewed in this context.