GABA in the Endocrine Pancreas : Its Putative Role as an Islet Cell Paracrine-signalling Molecule 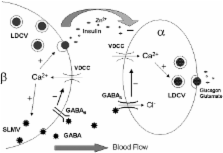 Neurotransmitter synthesis and uptake by isolated sympathetic neurones in microcultures.

Katelin Patterson,  L F Reichardt (1977)
Assays of isolated single sympathetic neurones show that their transmitter functions can be either adrenergic or cholinergic depending on growth conditions. The data suggest that the number of transmitters made by most mature individual neurones is restricted.

C Walczak,  S Lizarraga,  Elisabeth A. Wilde … (2001)
The guanosine tri-phosphatase Ran stimulates assembly of microtubule spindles. However, it is not known what aspects of the microtubule cytoskeleton are subject to regulation by Ran in mitosis. Here we show that Ran-GTP stimulates microtubule assembly by increasing the rescue frequency of microtubules three- to eightfold. In addition to changing microtubule dynamics, Ran-GTP also alters the balance of motor activities, partly as a result of an increase in the amount of motile Eg5, a plus-end-directed microtubule motor that is essential for spindle formation. Thus, Ran regulates multiple processes that are involved in spindle assembly.

Identification and characterization of the vesicular GABA transporter.

Jens Reimer,  K Schuske,  N. C. Edwards … (1997)
Synaptic transmission involves the regulated exocytosis of vesicles filled with neurotransmitter. Classical transmitters are synthesized in the cytoplasm, and so must be transported into synaptic vesicles. Although the vesicular transporters for monoamines and acetylcholine have been identified, the proteins responsible for packaging the primary inhibitory and excitatory transmitters, gamma-aminobutyric acid (GABA) and glutamate remain unknown. Studies in the nematode Caenorhabditis elegans have implicated the gene unc-47 in the release of GABA. Here we show that the sequence of unc-47 predicts a protein with ten transmembrane domains, that the gene is expressed by GABA neurons, and that the protein colocalizes with synaptic vesicles. Further, a rat homologue of unc-47 is expressed by central GABA neurons and confers vesicular GABA transport in transfected cells with kinetics and substrate specificity similar to those previously reported for synaptic vesicles from the brain. Comparison of this vesicular GABA transporter (VGAT) with a vesicular transporter for monoamines shows that there are differences in the bioenergetic dependence of transport, and these presumably account for the differences in structure. Thus VGAT is the first of a new family of neurotransmitter transporters.