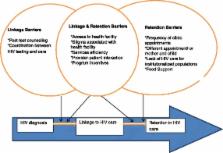 This qualitative study was conducted July 2012-August 2013. A total of 150 participants including; 59 patients diagnosed with HIV, TB, or hypertension; 16 caregivers; 10 community leaders; and 65 healthcare workers, were purposively sampled from three Academic Model Providing Access to Healthcare (AMPATH) sites. We conducted 16 in-depth interviews and 17 focus group discussions (FGDs) in either, English, Swahili, Kalenjin, Teso, or Luo. All data were audio recorded, transcribed, translated to English, and a content analysis performed. Demographic data was only available for those who participated in the FGDs.

The mean age of participants in the FGDs was 36 years (SD = 9.24). The majority (87%) were married, (62.7%) had secondary education level and above, and (77.6%) had a source of income. Salient barriers identified reflected on patients’ satisfaction with HIV care. Barriers unique to linkage were reported as quality of post-test counseling and coordination between HIV testing and care. Those unique to retention were frequency of clinic appointments, different appointments for mother and child, lack of HIV care for institutionalized populations including students and prisoners, lack of food support, and inconsistent linkage data. Barriers common to both linkage and retention included access to health facilities, stigma associated with health facilities, service efficiency, poor provider-patient interactions, and lack of patient incentives.

Our findings revealed that there were similarities and differences between perceived barriers to linkage and retention. The cited barriers reflected on the need for a more patient-centered approach to HIV care. Addressing health facility barriers may ultimately be more efficient and effective than addressing patient related barriers.

Retention in HIV Care between Testing and Treatment in Sub-Saharan Africa: A Systematic Review

Matthew Fox,  Sydney Rosen (2010)
Objectives To estimate the proportion of all-cause adult patient attrition from antiretroviral therapy (ART) programs in service delivery settings in sub-Saharan Africa through 36 months on treatment. Methods We identified cohorts within Ovid Medline, ISI Web of Knowledge, Cochrane Database of Systematic Reviews and four conference abstract archives. We summarized retention rates from studies describing observational cohorts from sub-Saharan Africa reporting on adult HIV 1- infected patients initiating first-line three-drug ART. We estimated all-cause attrition rates for 6, 12, 18, 24, or 36 months after ART initiation including patients who died or were lost to follow-up (as defined by the author), but excluding transferred patients. Results We analysed 33 sources describing 39 cohorts and 226 307 patients. Patients were more likely to be female (median 65%) and had a median age at initiation of 37 (range 34–40). Median starting CD4 count was 109 cells/mm3. Loss to follow-up was the most common cause of attrition (59%), followed by death (41%). Median attrition at 12, 24 and 36 months was 22.6% (range 7%–45%), 25% (range 11%–32%) and 29.5% (range 13%–36.1%) respectively. After pooling data in a random-effects meta-analysis, retention declined from 86.1% at 6 months to 80.2% at 12 months, 76.8% at 24 months and 72.3% at 36 months. Adjusting for variable follow-up time in a sensitivity analysis, 24 month retention was 70.0% (range: 66.7%–73.3%), while 36 month retention was 64.6% (range: 57.5%–72.1%). Conclusions Our findings document the difficulties in retaining patients in care for lifelong treatment, and the progress being made in raising overall retention rates.

Barriers and facilitating factors to the uptake of antiretroviral drugs for prevention of mother-to-child transmission of HIV in sub-Saharan Africa: a systematic review

Annabelle Gourlay,  Isolde Birdthistle,  Gitau Mburu … (2013)
Objectives To investigate and synthesize reasons for low access, initiation and adherence to antiretroviral drugs by mothers and exposed babies for prevention of mother-to-child transmission (PMTCT) of HIV in sub-Saharan Africa. Methods A systematic literature review was conducted. Four databases were searched (Medline, Embase, Global Health and Web of Science) for studies conducted in sub-Saharan Africa from January 2000 to September 2012. Quantitative and qualitative studies were included that met pre-defined criteria. Antiretroviral (ARV) prophylaxis (maternal/infant) and combination antiretroviral therapy (ART) usage/registration at HIV care and treatment during pregnancy were included as outcomes. Results Of 574 references identified, 40 met the inclusion criteria. Four references were added after searching reference lists of included articles. Twenty studies were quantitative, 16 were qualitative and eight were mixed methods. Forty-one studies were conducted in Southern and East Africa, two in West Africa, none in Central Africa and one was multi-regional. The majority (n=25) were conducted before combination ART for PMTCT was emphasized in 2006. At the individual-level, poor knowledge of HIV/ART/vertical transmission, lower maternal educational level and psychological issues following HIV diagnosis were the key barriers identified. Stigma and fear of status disclosure to partners, family or community members (community-level factors) were the most frequently cited barriers overall and across time. The extent of partner/community support was another major factor impeding or facilitating the uptake of PMTCT ARVs, while cultural traditions including preferences for traditional healers and birth attendants were also common. Key health-systems issues included poor staff-client interactions, staff shortages, service accessibility and non-facility deliveries. Conclusions Long-standing health-systems issues (such as staffing and service accessibility) and community-level factors (particularly stigma, fear of disclosure and lack of partner support) have not changed over time and continue to plague PMTCT programmes more than 10 years after their introduction. The potential of PMTCT programmes to virtually eliminate vertical transmission of HIV will remain elusive unless these barriers are tackled. The prominence of community-level factors in this review points to the importance of community-driven approaches to improve uptake of PMTCT interventions, although packages of solutions addressing barriers at different levels will be important.