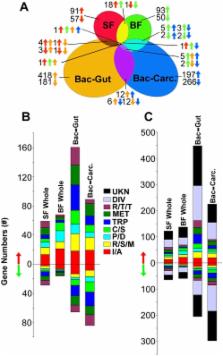 Malaria-transmitting mosquitoes are continuously exposed to microbes, including their midgut microbiota. This naturally acquired microbial flora can modulate the mosquito's vectorial capacity by inhibiting the development of Plasmodium and other human pathogens through an unknown mechanism. We have undertaken a comprehensive functional genomic approach to elucidate the molecular interplay between the bacterial co-infection and the development of the human malaria parasite Plasmodium falciparum in its natural vector Anopheles gambiae. Global transcription profiling of septic and aseptic mosquitoes identified a significant subset of immune genes that were mostly up-regulated by the mosquito's microbial flora, including several anti- Plasmodium factors. Microbe-free aseptic mosquitoes displayed an increased susceptibility to Plasmodium infection while co-feeding mosquitoes with bacteria and P. falciparum gametocytes resulted in lower than normal infection levels. Infection analyses suggest the bacteria-mediated anti- Plasmodium effect is mediated by the mosquitoes' antimicrobial immune responses, plausibly through activation of basal immunity. We show that the microbiota can modulate the anti- Plasmodium effects of some immune genes. In sum, the microbiota plays an essential role in modulating the mosquito's capacity to sustain Plasmodium infection.

The Anopheles gambiae mosquito that transmits the malaria-causing parasite Plasmodium has an intestinal bacterial flora, or microbiota, which comprises a variety of species. Elimination of this microbiota with antibiotic treatment will render the Anopheles mosquito more susceptible to Plasmodium infection. In this study we show that these bacteria can inhibit the infection of the mosquito with the human malaria parasite Plasmodium falciparum through a mechanism that involves the mosquito's immune system. Our study suggests that the microbial flora of mosquitoes is stimulating a basal immune activity, which comprises several factors with known anti- Plasmodium activity. The same immune factors that are needed to control the mosquito's microbiota are also defending against the malaria parasite Plasmodium. This complex interplay among the mosquito's microbiota, the innate immune system, and the Plasmodium parasite may have significant implications for the transmission of malaria in the field where the bacterial exposure of mosquitoes may differ greatly between ecological niches.

Lloye M Dillon,  Stacey Dillon (2003)
The diversity of the Insecta is reflected in the large and varied microbial communities inhabiting the gut. Studies, particularly with termites and cockroaches, have focused on the nutritional contributions of gut bacteria in insects living on suboptimal diets. The indigenous gut bacteria, however, also play a role in withstanding the colonization of the gut by non-indigenous species including pathogens. Gut bacterial consortia adapt by the transfer of plasmids and transconjugation between bacterial strains, and some insect species provide ideal conditions for bacterial conjugation, which suggests that the gut is a "hot spot" for gene transfer. Genomic analysis provides new avenues for the study of the gut microbial community and will reveal the molecular foundations of the relationships between the insect and its microbiome. In this review the intestinal bacteria is discussed in the context of developing our understanding of symbiotic relationships, of multitrophic interactions between insects and plant or animal host, and in developing new strategies for controlling insect pests.

Commensal host-bacterial relationships in the gut.

Iain Gordon,  Scott L Hooper (2001)
One potential outcome of the adaptive coevolution of humans and bacteria is the development of commensal relationships, where neither partner is harmed, or symbiotic relationships, where unique metabolic traits or other benefits are provided. Our gastrointestinal tract is colonized by a vast community of symbionts and commensals that have important effects on immune function, nutrient processing, and a broad range of other host activities. The current genomic revolution offers an unprecedented opportunity to identify the molecular foundations of these relationships so that we can understand how they contribute to our normal physiology and how they can be exploited to develop new therapeutic strategies.

Publisher ID: 09-PLPA-RA-0066R2
DOI: 10.1371/journal.ppat.1000423
PMC ID: 2673032
PubMed ID: 19424427
Copyright statement: Dong et al. This is an open-access article distributed under the terms of the Creative Commons Attribution License, which permits unrestricted use, distribution, and reproduction in any medium, provided the original author and source are credited.