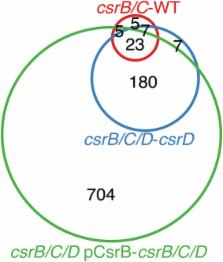 The Csr global regulatory system coordinates gene expression in response to metabolic status. This system utilizes the RNA binding protein CsrA to regulate gene expression by binding to transcripts of structural and regulatory genes, thus affecting their structure, stability, translation, and/or transcription elongation. CsrA activity is controlled by sRNAs, CsrB and CsrC, which sequester CsrA away from other transcripts. CsrB/C levels are partly determined by their rates of turnover, which requires CsrD to render them susceptible to RNase E cleavage. Previous epistasis analysis suggested that CsrD affects gene expression through the other Csr components, CsrB/C and CsrA. However, those conclusions were based on a limited analysis of reporters. Here, we reassessed the global behavior of the Csr circuitry using epistasis analysis with RNA seq (Epi-seq). Because CsrD effects on mRNA levels were entirely lost in the csrA mutant and largely eliminated in a csrB/ C mutant under our experimental conditions, while the majority of CsrA effects persisted in the absence of csrD, the original model accounts for the global behavior of the Csr system. Our present results also reflect a more nuanced role of CsrA as terminal regulator of the Csr system than has been recognized.

The pgaABCD locus of Escherichia coli promotes the synthesis of a polysaccharide adhesin required for biofilm formation.

James F. Preston,  X. Wang,  Tony Romeo (2004)
Production of a polysaccharide matrix is a hallmark of bacterial biofilms, but the composition of matrix polysaccharides and their functions are not widely understood. Previous studies of the regulation of Escherichia coli biofilm formation suggested the involvement of an unknown adhesin. We now establish that the pgaABCD (formerly ycdSRQP) locus affects biofilm development by promoting abiotic surface binding and intercellular adhesion. All of the pga genes are required for optimal biofilm formation under a variety of growth conditions. A pga-dependent cell-bound polysaccharide was isolated and determined by nuclear magnetic resonance analyses to consist of unbranched beta-1,6-N-acetyl-D-glucosamine, a polymer previously unknown from the gram-negative bacteria but involved in adhesion by staphylococci. The pga genes are predicted to encode envelope proteins involved in synthesis, translocation, and possibly surface docking of this polysaccharide. As predicted, if poly-beta-1,6-GlcNAc (PGA) mediates cohesion, metaperiodate caused biofilm dispersal and the release of intact cells, whereas treatment with protease or other lytic enzymes had no effect. The pgaABCD operon exhibits features of a horizontally transferred locus and is present in a variety of eubacteria. Therefore, we propose that PGA serves as an adhesin that stabilizes biofilms of E. coli and other bacteria.

The RNA molecule CsrB binds to the global regulatory protein CsrA and antagonizes its activity in Escherichia coli.

David P. Giedroc,  Fang Liu,  B Wei … (1997)
The RNA-binding protein CsrA (carbon storage regulator) is a new kind of global regulator, which facilitates specific mRNA decay. A recombinant CsrA protein containing a metal-binding affinity tag (CsrA-H6) was purified to homogeneity and authenticated by N-terminal sequencing, matrix-assisted laser desorption/ionization time of flight mass spectrometry, and other studies. This protein was entirely contained within a globular complex of approximately 18 CsrA-H6 subunits and a single approximately 350-nucleotide RNA, CsrB. cDNA cloning and nucleotide sequencing revealed that the csrB gene is located downstream from syd in the 64-min region of the Escherichia coli K-12 genome and contains no open reading frames. The purified CsrA-CsrB ribonucleoprotein complex was active in regulating glg (glycogen biosynthesis) gene expression in vitro, as was the RNA-free form of the CsrA protein. Overexpression of csrB enhanced glycogen accumulation in E. coli, a stationary phase process that is repressed by CsrA. Thus, CsrB RNA is a second component of the Csr system, which binds to CsrA and antagonizes its effects on gene expression. A model for regulatory interactions in Csr is presented, which also explains previous observations on the homologous system in Erwinia carotovora. A highly repeated nucleotide sequence located within predicted stem-loops and other single-stranded regions of CsrB, CAGGA(U/A/C)G, is a plausible CsrA-binding element.

A novel sRNA component of the carbon storage regulatory system of Escherichia coli.

Paul Babitzke,  Kazushi Suzuki,  Thomas Weilbacher … (2003)
Small untranslated RNAs (sRNAs) perform a variety of important functions in bacteria. The 245 nucleotide sRNA of Escherichia coli, CsrC, was discovered using a genetic screen for factors that regulate glycogen biosynthesis. CsrC RNA binds multiple copies of CsrA, a protein that post-transcriptionally regulates central carbon flux, biofilm formation and motility in E. coli. CsrC antagonizes the regulatory effects of CsrA, presumably by sequestering this protein. The discovery of CsrC is intriguing, in that a similar sRNA, CsrB, performs essentially the same function. Both sRNAs possess similar imperfect repeat sequences (18 in CsrB, nine in CsrC), primarily localized in the loops of predicted hairpins, which may serve as CsrA binding elements. Transcription of csrC increases as the culture approaches the stationary phase of growth and is indirectly activated by CsrA via the response regulator UvrY. Because CsrB and CsrC antagonize CsrA activity and depend on CsrA for their synthesis, a csrB null mutation causes a modest compensatory increase in CsrC levels and vice versa. Homologues of csrC are apparent in several Enterobacteriaceae. The regulatory and evolutionary implications of these findings are discussed.