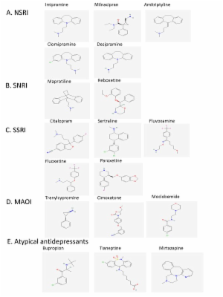 There is a high prevalence rate (30-50%) of Alzheimer's disease (AD) and depression comorbidity. Depression can be a risk factor for the development of AD or it can be developed secondary to the neurodegenerative process. There are numerous documented diagnosis and treatment challenges for the patients who suffer comorbidity between these two diseases. Meta analysis studies have provided evidence for the safety and efficacy of antidepressants in treatment of depression in AD patients. Preclinical and clinical studies show the positive role of chronic administration of selective serotonin reuptake inhibitor (SSRI) antidepressants in hindering the progression of the AD and improving patient performance. A number of clinical studies suggest a beneficial role of combinatorial therapies that pair antidepressants with FDA approved AD drugs. Preclinical studies also demonstrate a favorable effect of natural antidepressants for AD patients. Based on the preclinical studies there are a number of plausible antidepressants effects that may modulate the progression of AD. These effects include an increase in neurogenesis, improvement in learning and memory, elevation in the levels of neurotrophic factors and pCREB and a reduction of amyloid peptide burden. Based on this preclinical and clinical evidence, antidepressants represent a rational complimentary strategy for the treatment of AD patients with depression comorbidity.

G Heninger,  J Krystal,  A Cappiello … (2000)
A growing body of preclinical research suggests that brain glutamate systems may be involved in the pathophysiology of major depression and the mechanism of action of antidepressants. This is the first placebo-controlled, double-blinded trial to assess the treatment effects of a single dose of an N-methyl-D-aspartate (NMDA) receptor antagonist in patients with depression. Seven subjects with major depression completed 2 test days that involved intravenous treatment with ketamine hydrochloride (.5 mg/kg) or saline solutions under randomized, double-blind conditions. Subjects with depression evidenced significant improvement in depressive symptoms within 72 hours after ketamine but not placebo infusion (i.e., mean 25-item Hamilton Depression Rating Scale scores decreased by 14 +/- SD 10 points vs. 0 +/- 12 points, respectively during active and sham treatment). These results suggest a potential role for NMDA receptor-modulating drugs in the treatment of depression.

Olivier Berton,  Eric J. Nestler (2006)
All available antidepressant medications are based on serendipitous discoveries of the clinical efficacy of two classes of antidepressants more than 50 years ago. These tricyclic and monoamine oxidase inhibitor antidepressants were subsequently found to promote serotonin or noradrenaline function in the brain. Newer agents are more specific but have the same core mechanisms of action in promoting these monoamine neurotransmitters. This is unfortunate, because only approximately 50% of individuals with depression show full remission in response to these mechanisms. This review summarizes the obstacles that have hindered the development of non-monoamine-based antidepressants, and provides a progress report on some of the most promising current strategies.