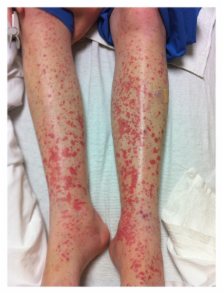 Vancomycin is U.S. Food and Drug Administration (FDA) approved for treatment of serious infections caused by methicillin-resistant Staphylococcus aureus (MRSA) or in individuals who have failed, cannot tolerate, or are allergic to other antibiotics. Very few cases of vancomycin-associated leukocytoclastic vasculitis have been published. We report on a patient who developed pruritus and palpable purpura in both lower extremities after receiving six days of intravenous vancomycin. Skin biopsy revealed leukocytoclastic vasculitis.

Parijat Joy,  Amanda Falk,  S Holder (2001)
To evaluate the literature for published cases of drug-induced vasculitis with cutaneous and/or systemic manifestations. The MEDLINE database was searched from 1965 to December 1999 for articles focusing on drugs and vasculitis, using various search terminologies (e.g., Churg-Strauss syndrome, Goodpasture's syndrome, Henoch-Schönlein purpura, various drugs suspected to induce vasculitis). Cases were included when they met the established criteria as described in the methodology. Drugs found to be most frequently associated with vasculitis were propylthiouracil, hydralazine, colony-stimulating factors, allopurinol, cefaclor, minocycline, D-penicillamine, phenytoin, isotretinoin, and methotrexate. The interval between the first exposure and appearance of symptoms was reported to be extremely variable (hours to years). Vasculitis has occurred after drug dosage increases and after rechallenge with the suspected drug. In the majority of cases, vasculitis has resolved after discontinuing the drug. Patients with more severe, often life-threatening, manifestations have required treatment with corticosteroids, plasmapheresis, hemodialysis, or cyclophosphamide. Death was the result in 10% of all published cases, with a predominance in patients in whom multiple organ systems were involved. Clinicians need to be suspect of drug-induced vasculitis to enable prompt diagnosis and treatment. This should improve patient outcomes based on the data referenced for this article.

M Sylvia,  Erika Felix (2009)
Vancomycin is well recognized as causing the nonallergic skin reaction known as red man syndrome; however, it is rarely suspected as causative in the setting of an immune-mediated skin reaction. We describe a 76-year-old Caucasian woman with a history of penicillin and sulfa allergies who was transferred to our medical center while receiving vancomycin for treatment of persistent methicillin-sensitive Staphylococcus aureus (MSSA) bacteremia. After admission, the patient's pacemaker was explanted; cultures from the pacemaker grew MSSA. Based on the culture data and her allergy to penicillin, vancomycin was continued. On day 4 of therapy, the patient developed a papular rash with small blisters on her distal upper extremities. Furosemide, which she was receiving intermittently to maintain fluid balance, was initially suspected as the likely cause. Furosemide was withheld; however, the rash worsened and spread to her neck and torso. Results of skin biopsy confirmed a severe leukocytoclastic, necrotizing small-cell vasculitis that met the criteria for a hypersensitivity vasculitis associated with drug therapy. Five days after discontinuation of vancomycin, the vasculitis was resolving and continued to resolve throughout the remainder of her hospitalization. Furosemide was readministered without worsening of the vasculitis. Use of the Naranjo adverse drug reaction probability scale indicated that the likelihood of vancomycin being the cause of the vasculitis was probable (score of 5). Clinicians should be aware of vancomycin as a potential cause of small-vessel vasculitis.

Jeff M. Whitworth,  Isabelle Thomas,  A Peltz … (1996)
We report the eleventh case of vancomycin-induced linear IgA disease. Our case is unusual because symptoms developed within minutes of administration of the drug. We discuss the pathogenesis and review the literature.