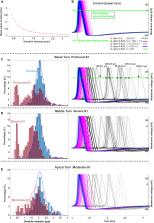 Due to limitations of human in vivo studies, detailed computational models enable understanding the neural signaling in the degenerated auditory system and cochlear implants (CIs). Four human cochleae were used to quantify hearing levels depending on dendritic changes in diameter and myelination thickness from type I of the auditory nerve fibers (ANFs). Type I neurons transmit the auditory information as spiking pattern from the inner hair cells (IHCs) to the cochlear nucleus. The impact of dendrite diameter and degree of myelination on neural signal transmission was simulated for (1) synaptic excitation via IHCs and (2) stimulation from CI electrodes. An accurate three-dimensional human cochlear geometry, along with 30 auditory pathways, mimicked the CI environment. The excitation properties of electrical potential distribution induced by two CI were analyzed. Main findings: (1) The unimodal distribution of control dendrite diameters becomes multimodal for hearing loss cases; a group of thin dendrites with diameters between 0.3 and 1 μm with a peak at 0.5 μm appeared. (2) Postsynaptic currents from IHCs excite such thin dendrites easier and earlier than under control conditions. However, this advantage is lost as their conduction velocity decreases proportionally with the diameter and causes increased spike latency and jitter in soma and axon. Firing probability reduces through the soma passage due to the low intracellular current flow in thin dendrites during spiking. (3) Compared with dendrite diameter, variations in myelin thickness have a small impact on spiking performance. (4) Contrary to synaptic excitation, CIs cause several spike initiation sites in dendrite, soma region, and axon; moreover, fiber excitability reduces with fiber diameter. In a few cases, where weak stimuli elicit spikes of a target neuron (TN) in the axon, dendrite diameter reduction has no effect. However, in many cases, a spike in a TN is first initiated in the dendrite, and consequently, dendrite degeneration demands an increase in threshold currents. (5) Threshold currents of a TN and co-stimulation of degenerated ANFs in other frequency regions depend on the electrode position, including its distance to the outer wall, the cochlear turn, and the three-dimensional pathway of the TN.

Chadi A Makary,  Jennifer Shin,  Sharon G Kujawa … (2011)
In cases of acquired sensorineural hearing loss, death of cochlear neurons is thought to arise largely as a result of sensory-cell loss. However, recent studies of acoustic overexposure report massive degeneration of the cochlear nerve despite complete hair cell survival (Kujawa and Liberman, J Neurosci 29:14077-14085, 2009). To assess the primary loss of spiral ganglion cells (SGCs) in human ears, neuronal counts were performed in 100 temporal bones from 100 individuals, aged newborn to 100 years, selected to include only cases with a normal population of inner and outer hair cells. Ganglion cell counts declined at a mean rate of 100 cells per year of life. There were no significant gender or inter-aural differences, and a slight increase in degeneration in the basal turn re upper turns was not statistically significant. The age-related decline in SGCs was significantly less than that in prior studies that included ears with hair cell loss (Otte et al., Laryngoscope 88:1231-1246, 1978), but significantly more than for analogous data on vestibular ganglion cells in cases without vestibular hair cell loss (Velazquez-Villasenor et al., Ann Otol Rhinol Laryngol Suppl 181:14-19, 2000). The age-related decline in SGC counts may contribute to the well-known decline in hearing-in-noise performance, and the data will help in interpretation of histopathological findings from temporal bones with known otologic disease.

Diane Lazard,  Christophe Vincent,  Frédéric Venail … (2012)
Objective To test the influence of multiple factors on cochlear implant (CI) speech performance in quiet and in noise for postlinguistically deaf adults, and to design a model of predicted auditory performance with a CI as a function of the significant factors. Study Design Retrospective multi-centre study. Methods Data from 2251 patients implanted since 2003 in 15 international centres were collected. Speech scores in quiet and in noise were converted into percentile ranks to remove differences between centres. The influence of 15 pre-, per- and postoperative factors, such as the duration of moderate hearing loss (mHL), the surgical approach (cochleostomy or round window approach), the angle of insertion, the percentage of active electrodes, and the brand of device were tested. The usual factors, duration of profound HL (pHL), age, etiology, duration of CI experience, that are already known to have an influence, were included in the statistical analyses. Results The significant factors were: the pure tone average threshold of the better ear, the brand of device, the percentage of active electrodes, the use of hearing aids (HAs) during the period of pHL, and the duration of mHL. Conclusions A new model was designed showing a decrease of performance that started during the period of mHL, and became faster during the period of pHL. The use of bilateral HAs slowed down the related central reorganization that is the likely cause of the decreased performance.

This article was submitted to Neural Technology, a section of the journal Frontiers in Neuroscience