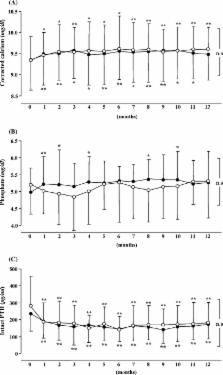 Background. Both the phenotypic alterations of parathyroid (PT) cells, e.g. down-regulation of the calcium-sensing receptor, and the increase of the PT cell number in nodular hyperplasia are the main causes of refractory secondary hyperparathyroidism. It is of great importance to prevent PT growth in an early stage.

Methods. To examine a more effective method of calcitriol therapy for the prevention of PT hyperplasia, we randomized haemodialysis patients with mild hyperparathyroidism to receive either daily orally administered calcitriol ( n = 33) or intravenous calcitriol ( n = 27) over a 12-month study period. Calcitriol was modulated so as to keep the serum intact PTH level between 100 and 150 pg/ml.

Results. Both groups showed similar reductions of the serum PTH level and similar increases in serum calcium. In both groups, there were no significant changes in the serum phosphate level. Long-term daily oral calcitriol therapy failed to prevent the increase of both maximum PT volume and total volume, as assessed by ultrasonography; however, intravenous calcitriol therapy successfully suppressed this progression. In the daily, oral group, both the bone-specific alkaline phosphatase (BAP) and the N-telopeptide cross-linked of type I collagen (NTX) significantly decreased, which was probably due to the PTH suppression. However, these bone metabolism markers remained stable in the intravenous group. The total dosage of calcitriol during the study was comparable in both groups.

Conclusions. These data indicate that intravenous calcitriol therapy in an early stage of secondary hyperparathyroidism is necessary to prevent PT growth and to keep a good condition of bone metabolism.

Geoffrey N. Hendy,  Lucie Canaff (2002)
The calcium-sensing receptor (CASR), expressed in parathyroid chief cells, thyroid C-cells, and cells of the kidney tubule, is essential for maintenance of calcium homeostasis. Here we show parathyroid, thyroid, and kidney CASR mRNA levels increased 2-fold at 15 h after intraperitoneal injection of 1,25-dihydroxyvitamin D3 (1,25(OH)2D3) in rats. Human thyroid C-cell (TT) and kidney proximal tubule cell (HKC) CASR gene transcription increased approximately 2-fold at 8 and 12 h after 1,25(OH)2D3 treatment. The human CASR gene has two promoters yielding alternative transcripts containing either exon 1A or exon 1B 5'-untranslated region sequences that splice to exon 2 some 242 bp before the ATG translation start site. Transcriptional start sites were identified in parathyroid gland and TT cells; that for promoter P1 lies 27 bp downstream of a TATA box, whereas that for promoter P2, which lacks a TATA box, lies in a GC-rich region. In HKC cells, transcriptional activity of a P1 reporter gene construct was 11-fold and of P2 was 33-fold above basal levels. 10(-8) m 1,25(OH)2D3 stimulated P1 activity 2-fold and P2 activity 2.5-fold. Vitamin D response elements (VDREs), in which half-sites (6 bp) are separated by three nucleotides, were identified in both promoters and shown to confer 1,25(OH)2D3 responsiveness to a heterologous promoter. This responsiveness was lost when the VDREs were mutated. In electrophoretic mobility shift assays with either in vitro transcribed/translated vitamin D receptor and retinoid X receptor-alpha, or HKC nuclear extract, specific protein-DNA complexes were formed in the presence of 1,25(OH)2D3 on oligonucleotides representing the P1 and P2 VDREs. In summary, functional VDREs have been identified in the CASR gene and provide the mechanism whereby 1,25(OH)2D up-regulates parathyroid, thyroid C-cell, and kidney CASR expression.

Depressed expression of calcium receptor in parathyroid gland tissue of patients with hyperparathyroidism.

The online version of this article has been published under an open access model. Users are entitled to use, reproduce, disseminate, or display the open access version of this article for non-commercial purposes provided that: the original authorship is properly and fully attributed; the Journal and Oxford University Press are attributed as the original place of publication with the correct citation details given; if an article is subsequently reproduced or disseminated not in its entirety but only in part or as a derivative work this must be clearly indicated. For commercial re-use, please contact journals.permissions@oxfordjournals.org