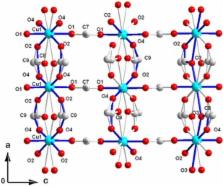 A dual‐functional organic–inorganic hybrid (BEDT‐TTF) 2Cu 2(HCOO) 5 ( 1) (BEDT‐TTF=bis(ethylenedithio)tetrathiafulvalene) was obtained through the electrochemical oxidation of neutral BEDT‐TTF in the presence of an ammonium salt of the one‐dimensional copper‐formate framework [(C 2H 5) 3NH] 2Cu 2(HCOO) 5 in a C 6H 5Cl–C 2H 5OH solution. Compound  1 was composed of organic donor BEDT‐TTF +0⋅ 5 in a θ‐phase arrangement and Jahn–Teller distorted (4,4) grid anion sheets [Cu 2(HCOO) 5 ‐] n with S=1/2. We identified the material as a semiconductor with values of σ 300K=10 −1 S cm −1. The anion sheet is a coordination isomer of [Cu 2(HCOO) 5 ‐] n and, compared with the starting material, shows antiferromagnetic behavior as the well‐known inorganic Cu−O, Co−O square layers for creating inorganic conducting magnets. Long‐range antiferromagnetic ordering was observed at 8.0 K.

H Sakurai,  Fujio Izumi,  R A Dilanian … (2003)
Since the discovery of high-transition-temperature (high-T(c)) superconductivity in layered copper oxides, many researchers have searched for similar behaviour in other layered metal oxides involving 3d-transition metals, such as cobalt and nickel. Such attempts have so far failed, with the result that the copper oxide layer is thought to be essential for superconductivity. Here we report that Na(x)CoO2*yH2O (x approximately 0.35, y approximately 1.3) is a superconductor with a T(c) of about 5 K. This compound consists of two-dimensional CoO2 layers separated by a thick insulating layer of Na+ ions and H2O molecules. There is a marked resemblance in superconducting properties between the present material and high-T(c) copper oxides, suggesting that the two systems have similar underlying physics.

Coexistence of ferromagnetism and metallic conductivity in a molecule-based layered compound.

Pamela Rios Coronado,  V Laukhin,  J Galán … (2000)
Crystal engineering--the planning and construction of crystalline supramolecular architectures from modular building blocks--permits the rational design of functional molecular materials that exhibit technologically useful behaviour such as conductivity and superconductivity, ferromagnetism and nonlinear optical properties. Because the presence of two cooperative properties in the same crystal lattice might result in new physical phenomena and novel applications, a particularly attractive goal is the design of molecular materials with two properties that are difficult or impossible to combine in a conventional inorganic solid with a continuous lattice. A promising strategy for creating this type of 'bi-functionality' targets hybrid organic/inorganic crystals comprising two functional sub-lattices exhibiting distinct properties. In this way, the organic pi-electron donor bis(ethylenedithio)tetrathiafulvalene (BEDT-TTF) and its derivatives, which form the basis of most known molecular conductors and superconductors, have been combined with molecular magnetic anions, yielding predominantly materials with conventional semiconducting or conducting properties, but also systems that are both superconducting and paramagnetic. But interesting bulk magnetic properties fail to develop, owing to the discrete nature of the inorganic anions. Another strategy for achieving cooperative magnetism involves insertion of functional bulky cations into a polymeric magnetic anion, such as the bimetallic oxalato complex [MnIICrIII(C2O4)3]-, but only insoluble powders have been obtained in most cases. Here we report the synthesis of single crystals formed by infinite sheets of this magnetic coordination polymer interleaved with layers of conducting BEDT-TTF cations, and show that this molecule-based compound displays ferromagnetism and metallic conductivity.