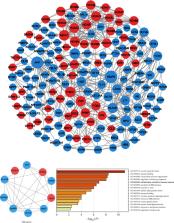 DNA methyltransferase 3 alpha (DNMT3A) mutation was one of the most frequent genetic alterations in acute myeloid leukemia (AML), which was associated with poor prognosis and appeared to be a potential biomarker. Herein, we aimed to identify the key genes and pathways involved in adult AML with DNMT3A mutations and to find possible therapeutic targets for improving treatment.

The RNA sequencing datasets of 170 adult AML patients were obtained from The Cancer Genome Atlas (TCGA) database. EdgeR of the R platform was used to identify the differentially expressed genes (DEGs). Gene Ontology (GO) and Kyoto Encyclopedia of Genes and Genomes (KEGG) enrichment analyses were performed by Metascape and DAVID. And protein-protein interaction (PPI) network and clustering modules were analyzed with the STRING database and Cytoscape software.

Bioinformatics analysis in the present study provided novel targets for early diagnosis and new strategies for treatment for AML with DNMT3A mutation.

Da Huang,  Brad T. Sherman,  Richard A. Lempicki (2009)
DAVID bioinformatics resources consists of an integrated biological knowledgebase and analytic tools aimed at systematically extracting biological meaning from large gene/protein lists. This protocol explains how to use DAVID, a high-throughput and integrated data-mining environment, to analyze gene lists derived from high-throughput genomic experiments. The procedure first requires uploading a gene list containing any number of common gene identifiers followed by analysis using one or more text and pathway-mining tools such as gene functional classification, functional annotation chart or clustering and functional annotation table. By following this protocol, investigators are able to gain an in-depth understanding of the biological themes in lists of genes that are enriched in genome-scale studies.