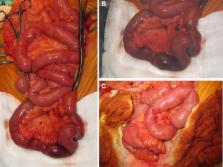 We describe a case of a 73 year old man that developed an AAC as a complication of CMI. The patient underwent a simultaneous cholecystectomy and open aortic revascularization which was successful. At 24 months of follow-up the patient is clinically well and regained weight.

Ischemia has been considered an important etiology for the development of AAC. In the settings of CMI, an AAC might develop has a herald sign of progression to acute mesenteric ischemia and infarction, as the cystic artery is a terminal artery with no collateral network. Performing the aortic revascularization simultaneously with the cholecystectomy might prevent this possible fatal outcome.

This case reinforces aortic and visceral occlusive disease as a possible risk factor for the development of AAC, and discusses the treatment controversies when managing both conditions simultaneously.

K Ryu,  J Ryu,  In Je Kim (2003)
Acute acalculous cholecystitis (AAC) tends to have a fulminant course and be associated with critically ill diseases, there have been reports of AAC without any risk factors but good prognosis. To assess the risk factors, clinical features and prognosis of AAC. All patients who had a cholecystectomy due to acute cholecystitis at Pundang Jesaeng General Hospital during a 43-month period were prospectively enrolled. AAC was defined by ultrasonographic, intraoperative and pathologic findings of acute cholecystitis without evidence of gallstones. Clinical features and pathologic findings were analyzed and outcome was assessed. 156 patients with acute cholecystitis were enrolled and 14% (22 of 156) met the criteria of AAC. Fifteen (68%) of the patients with AAC were male and the average age was 63 year old. Twenty patients were presented with AAC as outpatients of whom seven of them (35%) had atherosclerotic vascular disease. Laparoscopic cholecystectomy was performed in 126 patients (80.8%) with acute cholecystitis but was possible in only 12 patients (54.5%) with AAC. AAC was associated with a high incidence of gangrene (59%) but no patients died of acute cholecystitis. We conclude that AAC frequently occurs in elderly male outpatients without critical illness and gangrene is common but the prognosis is better than reported previously.

T Hakala,  P Nuutinen,  E T Ruokonen … (1997)
Acute acalculous cholecystitis is a well recognized complication of many acute illnesses. Ischaemia of the gallbladder seems to have an important role in its pathogenesis.