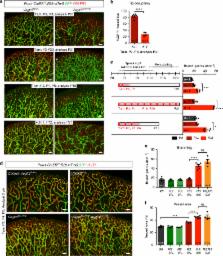 VEGF-C is a key regulator of lymphatic development. Here, Zhang et al. show that while complete loss of its receptor VEGFR3 results in vessel hypoplasia, mosaic loss of VEGFR3 leads to hyperplasia through induction of cell proliferation in neighboringnon-targeted cells, uncovering cell- and non-cell-autonomous roles for VEGFR3 during lymphatic vessel growth.

Bas Ponsioen,  Joanna K Bentley,  Stefan Schulte-Merker … (2010)
Sprouting angiogenesis requires the coordinated behaviour of endothelial cells, regulated by Notch and vascular endothelial growth factor receptor (VEGFR) signalling. Here, we use computational modelling and genetic mosaic sprouting assays in vitro and in vivo to investigate the regulation and dynamics of endothelial cells during tip cell selection. We find that endothelial cells compete for the tip cell position through relative levels of Vegfr1 and Vegfr2, demonstrating a biological role for differential Vegfr regulation in individual endothelial cells. Differential Vegfr levels affect tip selection only in the presence of a functional Notch system by modulating the expression of the ligand Dll4. Time-lapse microscopy imaging of mosaic sprouts identifies dynamic position shuffling of tip and stalk cells in vitro and in vivo, indicating that the VEGFR-Dll4-Notch signalling circuit is constantly re-evaluated as cells meet new neighbours. The regular exchange of the leading tip cell raises novel implications for the concept of guided angiogenic sprouting.

Delta-like ligand 4 (Dll4) is induced by VEGF as a negative regulator of angiogenic sprouting.

George D. Yancopoulos,  N Papadopoulos,  A Renard … (2007)
Genetic deletion studies have shown that haploinsufficiency of Delta-like ligand (Dll) 4, a transmembrane ligand for the Notch family of receptors, results in major vascular defects and embryonic lethality. To better define the role of Dll4 during vascular growth and differentiation, we selected the postnatal retina as a model because its vasculature develops shortly after birth in a highly stereotypic manner, during which time it is accessible to experimental manipulation. We report that Dll4 expression is dynamically regulated by VEGF in the retinal vasculature, where it is most prominently expressed at the leading front of actively growing vessels. Deletion of a single Dll4 allele or pharmacologic inhibition of Dll4/Notch signaling by intraocular administration of either soluble Dll4-Fc or a blocking antibody against Dll4 all produced the same set of characteristic abnormalities in the developing retinal vasculature, most notably enhanced angiogenic sprouting and increased endothelial cell proliferation, resulting in the formation of a denser and more highly interconnected superficial capillary plexus. In a model of ischemic retinopathy, Dll4 blockade also enhanced angiogenic sprouting and regrowth of lost retinal vessels while suppressing ectopic pathological neovascularization. Our data demonstrate that Dll4 is induced by VEGF as a negative feedback regulator and acts to prevent overexuberant angiogenic sprouting, promoting the timely formation of a well differentiated vascular network.

Sebastian Schoppmann,  Peter Birner,  Johannes Stöckl … (2002)
Formation of lymphatic metastasis is the initial step of generalized spreading of tumor cells and predicts poor clinical prognosis. Lymphatic vessels generally arise within the peritumoral stroma, although the lymphangiopoietic vascular endothelial growth factors (VEGF)-C and -D are produced by tumor cells. In a carefully selected collection of human cervical cancers (stage pT1b1) we demonstrate by quantitative immunohistochemistry and in situ hybridization that density of lymphatic microvessels is significantly increased in peritumoral stroma, and that a subset of stromal cells express large amounts of VEGF-C and VEGF-D. The density of cells producing these vascular growth factors correlates with peritumoral inflammatory stroma reaction, lymphatic microvessel density, and indirectly with peritumoral carcinomatous lymphangiosis and frequency of lymph node metastasis. The VEGF-C- and VEGF-D-producing stroma cells were identified in situ as a subset of activated tumor-associated macrophages (TAMs) by expression of a panel of macrophage-specific markers, including CD68, CD23, and CD14. These TAMs also expressed the VEGF-C- and VEGF-D-specific tyrosine kinase receptor VEGFR-3. As TAMs are derived from monocytes in the circulation, a search in peripheral blood for candidate precursors of VEGFR-3-expressing TAMs revealed a subfraction of CD14-positive, VEGFR-3-expressing monocytes, that, however, failed to express VEGF-C and VEGF-D. Only after in vitro incubation with tumor necrosis factor-alpha, lipopolysaccharide, or VEGF-D did these monocytes start to synthesize VEGF-C de novo. In conclusion VEGF-C-expressing TAMs play a novel role in peritumoral lymphangiogenesis and subsequent dissemination in human cancer.