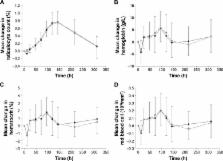 This study aimed to assess and compare the pharmacokinetic (PK) and pharmacodynamic (PD) properties following a single subcutaneous injection of epoetin alfa (Eporon ®) with those of the comparator (Eprex ®) in healthy male subjects.

A randomized, double-blind, two-sequence, crossover study was conducted. Subjects were randomly assigned to receive a single dose, that is, 4,000 IU, of the test or comparator epoetin alfa. After 4 weeks, all subjects received the alternative formulation. The primary PK parameters, maximum observed concentration (C max) and area under the curve extrapolated to infinity (AUC inf), were calculated with the serum erythropoietin (EPO) concentrations from blood samples collected for 144 h after dosing. The reticulocyte, hematocrit, hemoglobin and red blood cell counts were measured up to 312 h as PD markers. The primary PD parameters, maximum observed effect (E max) and area under the effect curve (AUEC), were obtained from the baseline-corrected reticulocyte count. The serum EPO concentration and the reticulocyte count were used to assess the concentration–response relationship. The tolerability and immunogenicity profiles were assessed together.

Forty-two subjects completed the study. The mean EPO concentration–time profiles were comparable between the two formulations. The geometric mean ratios (90% CI) of the C max and AUC inf were 0.908 (0.843–0.978) and 1.049 (0.999–1.101), respectively, both of which were within the regulatory range of 0.80–1.25. Additionally, the PD and tolerability profiles were similar between the two formulations. The time-matched serum EPO concentration and PD markers presented a counterclockwise hysteresis, suggesting a time delay between the measured concentration and the response. Both formulations were well tolerated, and production of anti-drug antibodies was not observed.

The two epoetin alfa formulations had similar PK, PD and tolerability profiles. Furthermore, both formulations had a similar time-matched serum EPO concentration and erythropoietic response profile. Thus, the two formulations are expected to be used interchangeably in clinical settings.

Mechanisms of anemia in CKD.

Jodie L. Babitt,  Herbert Y. Lin (2012)
Anemia is a common feature of CKD associated with poor outcomes. The current management of patients with anemia in CKD is controversial, with recent clinical trials demonstrating increased morbidity and mortality related to erythropoiesis stimulating agents. Here, we examine recent insights into the molecular mechanisms underlying anemia of CKD. These insights hold promise for the development of new diagnostic tests and therapies that directly target the pathophysiologic processes underlying this form of anemia.

Nicole Casadevall,  Allen Nissenson,  Robin Stonecash … (2008)
Since 1988, millions of patients have received epoetin products intravenously (IV) and subcutaneously. In 1998, epoetin-associated pure red cell aplasia (PRCA) was first reported and causation was attributed to formulations without human serum albumin (HSA), subcutaneous administration, and uncoated rubber stoppers. Data on erythropoietin (EPO)-associated PRCA were obtained from the Food and Drug Administration (FDA), regulatory authorities in other countries, and the manufacturers of epoetin alfa, epoetin beta, and darbepoetin. The data included information on numbers of PRCA cases and estimated exposure-adjusted incidence rates by EPO product, anemia etiology, administration route, country of PRCA identification, and date reported. In 1999, academicians in Paris identified 12 EPO-treated patients with antibody-mediated PRCA; 11 of these patients were on hemodialysis and had received subcutaneous Eprex (Johnson & Johnson). In 2002, authorities in Europe, Australia, Singapore, and Canada mandated Eprex by IV route to hemodialysis patients, and the relevant manufacturers added Teflon coating to prefilled syringes of Eprex; PRCA cases subsequently decreased by 90 percent. By 2003, 180 Eprex-associated PRCA cases were identified in Europe, Canada, Australia, and Asia, despite improvements in handling. Since 2002, FDA safety databases include information on 59 new cases of antibody-associated PRCA, primarily associated with subcutaneous epoetin alfa and darbepoetin that does not contain HSA. Independent actions by regulatory authorities, manufacturers, and academic researchers identified significant numbers of PRCA cases between 1998 and 2003 and characterized the probable etiology. Today, antibody-mediated PRCA is an infrequent class toxicity occurring among some hemodialysis patients on EPOs.