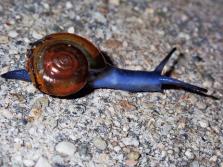 Phorid flies are amongst the most biologically diverse and species-rich groups of insects. Ways of life range from parasitism, herbivory, fungivory, to scavenging. Although the lifestyles of most species are unknown, many are parasitoids, especially of social insects. Some species of ant-parasitoids are attracted to injured hosts for feeding purposes to develop eggs, as well as for oviposition, requiring each female to find two injured hosts.

Females of the phorid fly Megaselia steptoeae Hartop et al. ( Diptera : Phoridae ) were found to be quickly attracted to crushed glass snails of the species Oxychilus draparnaudi (Beck) ( Gastropoda : Oxychilidae ). Most females were without mature eggs and apparently were attracted for feeding purposes only; other injured molluscs offered at the same time were not attractive. One female laid eggs in captivity and offspring were reared to the pupal stage. The lifestyle of this species is similar to that of parasitoids of injured ants, which also require separate hosts of the same species for feeding and oviposition. We conclude that injured hosts must be common in the environment to attract these host-specific scavengers.

Jérome Morinière,  Bruno Cancian de Araujo,  Athena Lam … (2016)
The German Barcoding initiatives BFB and GBOL have generated a reference library of more than 16,000 metazoan species, which is now ready for applications concerning next generation molecular biodiversity assessments. To streamline the barcoding process, we have developed a meta-barcoding pipeline: We pre-sorted a single malaise trap sample (obtained during one week in August 2014, southern Germany) into 12 arthropod orders and extracted DNA from pooled individuals of each order separately, in order to facilitate DNA extraction and avoid time consuming single specimen selection. Aliquots of each ordinal-level DNA extract were combined to roughly simulate a DNA extract from a non-sorted malaise sample. Each DNA extract was amplified using four primer sets targeting the CO1-5’ fragment. The resulting PCR products (150-400bp) were sequenced separately on an Illumina Mi-SEQ platform, resulting in 1.5 million sequences and 5,500 clusters (coverage ≥10; CD-HIT-EST, 98%). Using a total of 120,000 DNA barcodes of identified, Central European Hymenoptera, Coleoptera, Diptera, and Lepidoptera downloaded from BOLD we established a reference sequence database for a local CUSTOM BLAST. This allowed us to identify 529 Barcode Index Numbers (BINs) from our sequence clusters derived from pooled Malaise trap samples. We introduce a scoring matrix based on the sequence match percentages of each amplicon in order to gain plausibility for each detected BIN, leading to 390 high score BINs in the sorted samples; whereas 268 of these high score BINs (69%) could be identified in the combined sample. The results indicate that a time consuming presorting process will yield approximately 30% more high score BINs compared to the non-sorted sample in our case. These promising results indicate that a fast, efficient and reliable analysis of next generation data from malaise trap samples can be achieved using this pipeline.