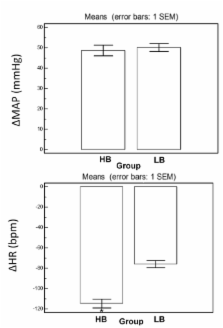 The sympathetic control of blood pressure.

Chiara Bersano,  Peter J. Schwartz,  Maria La Rovere … (2002)
Despite the rational expectation for a survival benefit produced by exercise training among post-myocardial infarction (MI) patients, direct evidence remains elusive. Clinically, changes in autonomic balance toward lower vagal activity have consistently been associated with increased mortality risk; conversely, among both control and post-MI dogs, exercise training improved vagal reflexes and prevented sudden death. Accordingly, we tested the hypothesis that exercise training, if accompanied by a shift toward increased vagal activity of an autonomic marker such as baroreflex sensitivity (BRS), could reduce mortality in post-MI patients. Ninety-five consecutive male patients surviving a first uncomplicated MI were randomly assigned to a 4-week endurance training period or to no training. Age (51+/-8 versus 52+/-8 years), site of MI (anterior 41% versus 43%), left ventricular ejection fraction (52+/-13 versus 51+/-14%), and BRS (7.9+/-5.4 versus 7.9+/-3.4 ms/mm Hg) did not differ between the two groups. After 4 weeks, BRS improved by 26% (P=0.04) in trained patients, whereas it did not change in nontrained patients. During a 10-year follow-up, cardiac mortality among the 16 trained patients who had an exercise-induced increase in BRS >or = 3 ms/mm Hg (responders) was strikingly lower compared with that of the trained patients without such a BRS increase (nonresponders) and that of the nontrained patients (0 of 16 versus 18 of 79 [23%], P=0.04). Cardiac mortality was also lower among responders irrespective of training (4% versus 24%, P=0.04). Post-MI exercise training can favorably modify long-term survival, provided that it is associated with a clear shift of the autonomic balance toward an increase in vagal activity.

M Pozzoli,  Renato A. Mortara,  L Tavazzi … (1997)
In chronic heart failure (CHF), arterial baroreflex regulation of cardiac function is impaired, leading to a reduction in the tonic restraining influence on the sympathetic nervous system. Because baroreflex sensitivity (BRS), as assessed by the phenylephrine technique, significantly contributes to postinfarction risk stratification, the aim of the present study was to evaluate whether in CHF patients a depressed BRS is associated with a worse clinical hemodynamic status and unfavorable outcome. BRS was assessed in 282 CHF patients in sinus rhythm receiving stable medical therapy (age, 52+/-9 years; New York Heart Association [NYHA] class, 2.4+/-0.6; left ventricular ejection fraction [LVEF], 23+/-6%). The BRS of the entire population averaged 3.9+/-4.0 ms/mm Hg (mean+/-SD) and was significantly related to LVEF and hemodynamic parameters (LVEF, P 3 ms/mm Hg). During a mean follow-up of 15+/-12 months, 78 primary events (cardiac death, nonfatal cardiac arrest, and status 1 priority transplantation) occurred (27.6%). BRS was significantly related to outcome (log rank, 9.1; P<.01), with a relative risk of 2.7 (95% confidence interval, 1.6 to 4.7) for patients with the major derangement in BRS (<1.3 ms/mm Hg). At multivariate analysis, BRS was an independent predictor of death after adjustment for noninvasive known risk factors but not when hemodynamic indexes were also considered. In CHF patients with severe mitral regurgitation, however, BRS remained a strong prognostic marker independent of hemodynamic function. In moderate to severe CHF, a depressed sensitivity of vagal reflexes parallels the deterioration of clinical and hemodynamic status and is significantly associated with poor survival. Particularly in patients with severe mitral regurgitation the baroreceptor modulation of heart rate provides prognostic information of incremental value to hemodynamic parameters.

Contributions: VEV, LCA, HMJ, ARPR, OFMF and CF participated in the acquisition of data and revision of the manuscript. VEV, LCA and CF conceived the study, determined the design, performed the statistical analysis, interpreted the data and drafted the manuscript. All authors read and gave final approval for the version submitted for publication.

>This work is licensed under a Creative Commons Attribution NonCommercial 3.0 License (CC BY-NC 3.0).